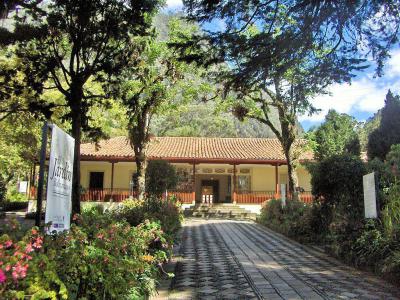 In the late 17th century, Jose Antonio Portocarreno, a Spanish businessman, purchased land from the chaplain of Monserrate. Jose Portocarreno built a country house on the land. His heirs could not maintain the property, and by the time of independence in 1819, the house had seriously deteriorated. The new Republican government bought the house and restored it.

The government donated the house to the Liberator, Simon Bolivar, for his services in the War of Independence. Bolivar traveled frequently and spent not more than 500 days in the house over nine years. The house was a refuge for Bolivar and his mistress and revolutionary fellow Manuelita Saenz. Forced to resign in 1830, he died in Cartagena.

After Bolivar's death, the house changed hands several times. It saw use as a private home, a brewery, a tannery, a mental home, and a girls' academy. In 1919, the house was purchased and became a museum dedicated to the life and work of Simon Bolivar and the Wars for Independence.

In 1974 the sword of Bolivar was stolen by guerrillas of the M-19 Movement. They left a note "Bolivar, your sword returns to the battlefield." The sword was peaceably returned in 1991.

The Bolivar House Museum holds over 3,000 artifacts associated with Bolivar. The house itself has been renovated to look as it did in the time of Bolivar's tenancy. The museum is located between the district of La Candelaria and Cerro de Monserrate, on Street 21. It is an easy walk from La Candelaria.
Image Courtesy of Wikimedia and Tefita228.