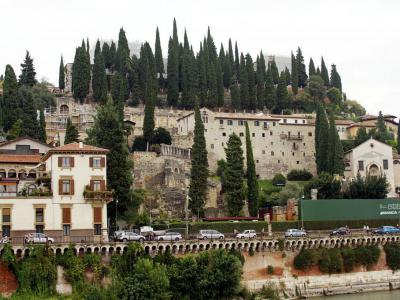 Verona has some of the most beautiful castles in the world. They were built to allow their inhabitants to protect and defend themselves, but also provided a luxurious standard of living that few outside the palace walls ever experienced.

The Piazzale Castel San Pietro is an ancient fortress built atop the ruins of a viscount’s castle. It was built by Giangaleazzo Visconti in 1398 and was originally joined to the continuous wall around the Socorro. It sits on top of a hill that provides an excellent panoramic view of the city, especially when the sun is going down. Some of the buildings you will see from the San Pietro include the Santa Sofia, San Leonardo, and the San Mattia Castles.

One of the advantages of the San Pietro is that is fairly close to several attractions. The Museo Archeologico del Teatro Romano, the SS. Siro e Libera¸ the San Giovanni in Valle, the Mostra Permanente Africana, the Palazzo del Vescovado, the Ponte della Pietra, the Sant'Anastasia, the San Giorgio in Braida, the Santa Maria in Organo, the Sant' Elena, the Duomo Santa Maria Matricolare, and the Biblioteca Capitolare are just a few of the sites within walking distance of the castle.

Why You Should Visit:
You can't go inside the castle – it's all about the views across Verona which are well worth your trouble. Picture perfect!

Tip:
Stop at the Re Teodorico restaurant for cold drinks before leaving and enjoy the view from there as well.
You can take the funicular up and walk down, although hiking up the stairs is doable as well if you are fit.
Image by BestKevin on Flickr under Creative Commons License.