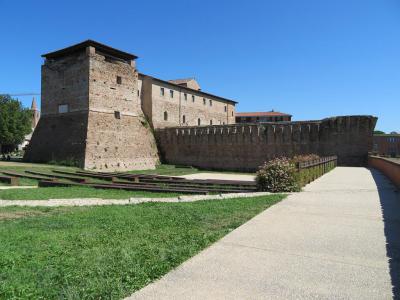 Castel Sismondo is a castle in Rimini. Of the original construction, begun by the lord of Rimini Sigismondo Pandolfo Malatesta on March 20, 1437, only the central nucleus remain. According to the contemporary chronicles, Malatesta himself designed it. The works lasted some 15 years.

In origin the castle-palace was provided with a large moat, with a rivelin at the main entrance, sporting the heraldic symbols of the House of Malatesta. The walls were thought to be thick enough to bear the struck from the new artillery pieces appearing in Europe in that period. Although originally positioned externally from the city, it has no towers facing that side: all towers are in fact oriented towards city. These towers are square, and once housed a bronze cannon each. The central part of the castled was the residence of the prince, with rooms decorated with tapestries, curtains and frescoes.

Sigismondo Pandolfo Malatesta died here in 1468. In 1821 the castle was turned into barracks for the local Carabinieri. Five years later, the external walls were demolished and the moat filled. After a period of decadence, the edifice is now used as seat of exhibitions.
Image Courtesy of Wikimedia and Gheeeeeet.
Sight description based on Wikipedia.

Want to visit this sight? Check out these Self-Guided Walking Tours in Rimini. Alternatively, you can download the mobile app "GPSmyCity: Walks in 1K+ Cities" from iTunes App Store or Google Play. The app turns your mobile device to a personal tour guide and it works offline, so no data plan is needed when traveling abroad.

Create Your Own Walk in Rimini

Creating your own self-guided walk in Rimini is easy and fun. Choose the city attractions that you want to see and a walk route map will be created just for you. You can even set your hotel as the start point of the walk.

An ideal way to explore the history of a city is by gazing at its amazing architecture. Rimini is no exception. The palaces and administrative buildings of Rimini are closely tied to every major event that has happened in the city since ancient times. Take this tour to admire the architectural heritage of Rimini.

Rimini is famous as the hometown of the world-famous film director Federico Fellini. This is the city where he was born and where he died, the city that inspired him and whose images Fellini used frequently in his movies. Take this tour and feel the atmosphere of Rimini that enchanted the great film director.

Sitting on the Adriatic coast of Italy in Emilia-Romagna region, the ancient town of Rimini – originally known as Ariminum – has been around for centuries, dating back as far as the times of Julius Caesar. Following WWII, Rimini's rich historic heritage was on the verge of disappearing as most of the city lay in ruins. Luckily, many of its ancient monuments have been restored to the...  view more