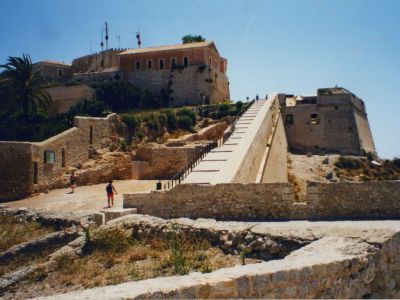 Castle of Ibiza, Ibiza (must see)

The Castle of Ibiza, or Castell d'Eivissa in Catalan, can be argued to be the heart of the island. The castle grounds are located at the top of the fortified Upper Town. The castle is comprised of numerous buildings that include the Tower of Homage, the 8th century Almudaina, the governor's home and the 18th century infantry barracks.

Reconstruction efforts have been primarily focused on the Sant Jaume Bastion and the Sant Pere Bastion. Each of these bastions offer exhibitions that are open to the public. While visitors cannot enter the main castle, it is worthwhile to tour both of these bastions and the castle grounds.

The Sant Jaume Bastion is now a military museum. It houses a weapons exhibition with a focus on military technology from the 16th and 18th centuries. Visitors are welcome to touch the items on display, which include cannons, mortar, muskets, helmets and swords.

The Sant Pere Bastion shows the history of the castle. Tourists can see how the city wall was built through an audio visual display. The exhibition includes a reproduction of Renaissance-era scaffolding. Both bastions were designed by Giovanni Battista Calvi in 1555.