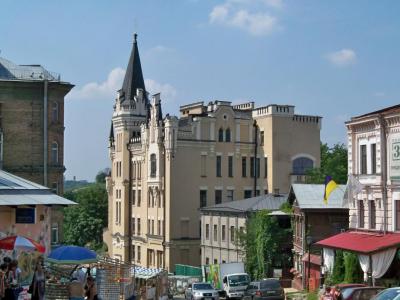 Castle of Richard the Lionheart, Kiev

The "Castle of Richard the Lionheart" house was built from 1902–1904. It was originally supposed to be called Orlov House in reference to its constructor Dmitry Orlov. But because its owner failed to clear the house construction with the city's authorities, a major scandal arose. Viktor Nekrasov named the building "The Castle of Richard the Lionheart", after the 12th century English king in his book. It has been established that the modernized Gothic fronts were practically copied from a published design for a Saint Petersburg building by the architect R. Marfeld. But the stunning relief of Andriyivskyy Descent softened the effect of this plagiarism.

The cellar of the building contained a barber's shop, a grocery store and a butcher shop. The remaining premises were used as apartments for rent. When Dimitri Orlov died in 1911 while building a railroad in the Russian Far East, his widow, left with five children, had to sell off the house to pay her family's debts. In 1983, renovation works were started on the building to convert it into a hotel.[19] Since the fall of the Soviet Union in 1991, various reconstruction works have been largely unsuccessful. As of 2009, the Castle of Richard the Lionheart still stands empty and fenced off in renovation.
Image Courtesy of Wikimedia and Neovitaha777.
Sight description based on Wikipedia.