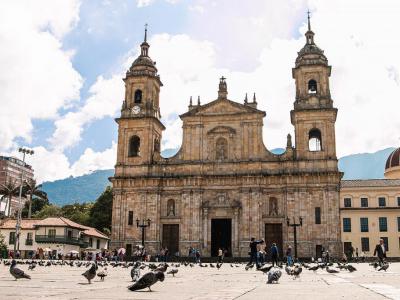 On August 6, 1538, the missionary Friar Domingo de las Casas offered the first mass to the conquistadors. Services were held in a humble chapel of mud and straw. The place of worship was called Our Lady of Hope. A banner used on that day can be seen in the place where the first stones were laid for the construction of the Primate Cathedral of Colombia in Bolivar Square in Bogota.

The Primate Cathedral is made up of a Classical basilica plan in the form of a Latin Cross that occupies an area of 5,300 square meters. It has five naves; a central nave, two side naves, and two others for the chapels. There are 12 chapels, six on each side nave. The lantern and dome are over the transept. The dome is supported by four indigo-blue pendentives decorated with tongues of flame.

The front of the Cathedral has a lower part of eight Corinthian pilasters high as the architrave, frieze, and cornice. There are eight Ionic pilasters in the second part. There are three doors with sculptures. St Peter is on one door, St Paul on the other, and the Immaculate Conception with two angels is on the center door.

The facade is finished with a marble slab on the lintel of the main entrance, bearing the name of Friar Domingo de Petres, Capuchin. There are two towers, each 171 feet high. The towers are made in three sections with four sides. There are bells in the middle sections. The north tower has a clock.
Image Courtesy of Wikimedia and Paulakindsvater.