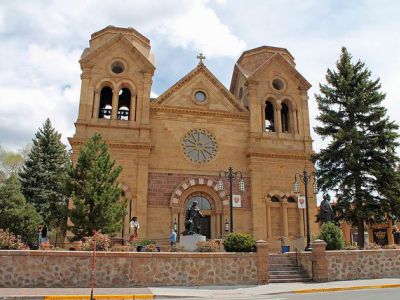 Influenced by the French-born Archbishop Lamy, Saint Francis Cathedral was designed in the Romanesque Revival style. As such, the cathedral features characteristic round arches separated by Corinthian columns and truncated square towers. The large rose window in front and those of the Twelve Apostles in the lateral nave windows were imported from Clermont-Ferrand in France. The towers were originally planned to be topped with dramatic 160-foot steeples, but due to lack of funds these were never built. The cathedral was built from yellow limestone blocks quarried near the present site of Lamy. A 2005 addition to the upper facade of the cathedral is a small, round window featuring the dove of the Holy Spirit. It is a stained glass replica of the translucent alabaster window designed in the 17th Century by Italian Baroque artist Bernini that can be seen in St. Peter's Basilica in Vatican City. The Cathedral of Saint Francis of Assisi was officially elevated to a basilica by Pope Benedict XVI on October 4, 2005, becoming the Cathedral Basilica of Saint Francis of Assisi.