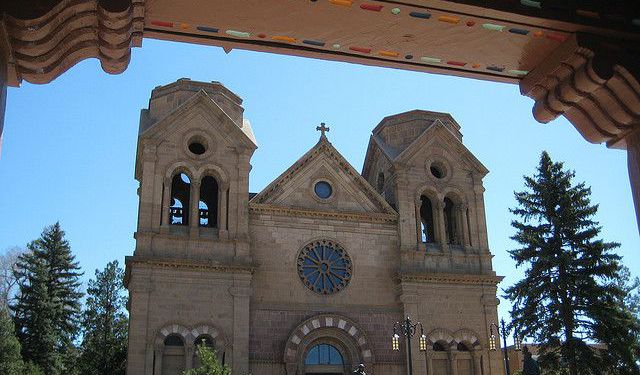 Image by puroticorico on Flickr under Creative Commons License.

Santa Fe has many beautiful churches, some of them dating back to the foundation of the city. Take this self-guided tour to discover the Archdiocese of Santa Fe’s artifacts, see the oldest church in the country and enjoy collections of Italian Renaissance and Mexican Baroque paintings.
How it works: Download the app "GPSmyCity: Walks in 1K+ Cities" from iTunes App Store or Google Play to your mobile phone or tablet. The app turns your mobile device into a personal tour guide and its built-in GPS navigation functions guide you from one tour stop to next. The app works offline, so no data plan is needed when traveling abroad.

1) San Miguel Mission (Oldest Church in the US) (must see)

Originally built around 1610 by Franciscan friars, the Mision de San Miguel is the oldest church in the United States and one of the oldest structures. It was the first church built in Santa Fe. The Spanish missionaries located the facility across the river in an area primarily inhabited by native people. Missionary work was a priority for the Spanish settlers, so they built the mission building before building their own church closer to the Plaza.

The San Miguel Mission has been rebuilt several times, so it is unclear precisely what extent of the mission is original. It is an adobe structure with clay walls that are about five feet thick. The stone buttresses were added in 1887 to help support the structure. The original church was likely slightly smaller, and while it has been rebuilt and updated from time to time, it remains on the same foundations.

Besides the church's beautiful architecture and historical significance, the building houses several pieces of artwork and history worth a visit. The reredos are wooded altar screens that date back to 1798. Between the screens, you'll see a wooden statue of St. Michael the Archangel, which came from Mexico in 1709 and has been in place here since at least 1776. There are many other paintings surrounding the reredos. You'll also find the original bell that hung in the tower before 1872. The bell's engraving indicates that it is from 1356, but historians think this is highly unlikely. Most probably, a casting defect changed the eight to appear like a three.


Image by M.Bucka on Wikimedia under Creative Commons License.
2

Now a museum and wedding chapel, this former Roman Catholic church was commissioned in 1873. It was built by the Sisters of Loretto for their girls' school. French architects Antoine and Projectus Mouly based the design on the Gothic Revival-style Sainte-Chapelle in Paris. The building has the spires, buttresses, and stained glass that you'd expect from such a structure.

The centerpiece of the church, however, is the spiral staircase. Known as the Miraculous Stairs, they climb two full turns to the choir loft above. The stairs have no support structure or central pole, and they are held together only with glue and wood pegs. The stairs never fail to impress even modern carpenters who have access to modern tools and methods that the stair's creator couldn't even dream of.

According to the Sisters of Loretto, the choir loft and stairs were the last additions needed for the church, but the primary architect's death created problems. No one could find a solution for creating the loft in such a limited space, and so the nuns prayed to St. Joseph, the patron saint of carpenters, for nine days straight. On the ninth day, a mysterious stranger appeared and agreed to build the staircase. The man worked in solitude and disappeared after the staircase was completed. The sisters were certain it was a miracle.

The spiral staircase is sure to impress and inspire all visitors with its workmanship and history. You also won't want to miss the gorgeous adornments to the former church, including the stained glass rose window and many statues. The chapel was the first Gothic building built west of the Mississippi.

Take the time to listen to the chapel's audiotape history, which will fill you in on the intriguing history of the chapel. The tape plays on a loop throughout the chapel.

3) Cathedral Basilica of St. Francis of Assisi (must see)

Commonly referred to as Saint Francis Cathedral, this Roman Catholic cathedral is located downtown and is the home of the Archdiocese of Santa Fe. The current building was erected between 1869 and 1886 on the site of an older adobe church. The church's design stands in stark contrast with its surroundings, as it was built in the Romanesque Revival style. It features round arches with Corinthian columns and square towers. The church is also made from quarried limestone bricks instead of the adobe wall construction of Pueblo-style buildings.

The church is full of and surrounded by beautiful artwork. You'll find statues of St. Francis of Assisi, the patron saint of the diocese, along with statues of Saint Kateri and Jean-Baptiste Lamy. The Stations of the Cross Prayer Garden features 14 sculptures that show the hours leading up to Jesus' crucifixion.

Inside the church, you'll see ornate details like the engraved keystone and bronze doors. The rose window and the nave stained glass windows were imported from Clermont-Ferrand in France.

The church will transport you from Santa Fe to Europe with its Romanesque architecture. Interior tours feature captivating stain glasswork, while the outside gardens are sure to bring a peaceful respite from the busy city. Docents are happy to give personal tours to bring this church's history to life.

Be sure to check the Cathedral's website for their Mass and Sacraments schedules. Don't miss the Native American Madonna, the oldest in the US.

Church of the Holy Faith is an historic Episcopal church. The parish was established in 1863 and is the oldest Episcopal church in New Mexico. In its early days, many of the church members were the Anglo soldiers and officers garrisoned in Santa Fe during the American Civil War.

The first church building was completed in 1882 in a style known as "folk gothic" which resembles the architecture of many English cathedrals and parish churches dating from the simplified style of the 13th century. The building was also one of the first dressed-stone buildings in Santa Fe at the time.

In the 20th century, the church's physical footprint grew under two projects led by Santa Fe architect and parishioner John Gaw Meem whose Pueblo Revival architecture became known as “Santa Fe style". Meem designed the church's adjacent parish house, now known as Palen Hall, which was completed in 1926. Towards the end of his career, Meem expanded the sanctuary, adding a chancel and choir in 1953.

What you see today is a simple gothic structure with a clear Santa Fe flavor. Go visit it if you are in the neighborhood.
Image by Robert Otani on Flickr under Creative Commons License.
5

The structure was designed by the Los Angeles architectural firm of Hunt and Burns who were known for their designs in the California Spanish Mission Revival architecture style. But Hunt and Burns decided to go with a design that bridges the Spanish building tradition of New Mexico and that of the Moors in southern Spain.

The final product is a Moorish Revival style structure based loosely on one of the gatehouses to the Court of the Lions at the Alhambra in Spain. The building bears some obvious similarities with the Southwest Museum in Los Angeles, which was being designed by Hunt and Burns around the same time, including the tower but without the Islamic entry.

A special note about the building is that is was built before Santa Fe introduced strict building ordinances governing the architectural style of all buildings in Santa Fe, namely Pueblo Style, Territorial and Norther New Mexico. With its Moorish influenced architecture and pink color, the Scottish Rite Temple looks decidedly next to the other buildings on the block.

Maybe because its unique look, the building was chosen to serve as the filming location for the 2016 Tina Fey film Whiskey Tango Foxtrot.
Image by Carptrash under Creative Commons License.
Sight description based on wikipedia
6

6) Santuario de Guadalupe (Shrine of Our Lady of Guadalupe)

The 'Shrine of Our Lady of Guadalupe' was built in the 1770s–it's the oldest shrine in the United States dedicated to the Virgin of Guadalupe. It was built to commemorate Mary's apparitions in 1531 to the Aztec peasant Juan Diego of Tepeyac. The Shrine, situated near the Santa Fe Plaza near the river, was placed near the end of El Camino Real from Mexico City.

Our Lady of Guadalupe, or Nuestra Señora de Guadalupe, is a Catholic title for the Virgin Mary. According to Catholic accounts, the Virgin Mary appeared before a Mexican farmer in 1531 five times. She told him to seek out the archbishop and build a church in her honor. The archbishop, who was suspicious of Juan Diego's claims, asked him to return to the hill where he saw the Virgin and ask for proof. After relaying the message to the Virgin, Juan Diego found non-native Castillian roses blooming on the barren hills of Tepeyac. The Virgin also appeared before Juan Diego's brother on his deathbed, miraculously healing him. The archbishop was duly convinced.

The Virgin became the patron saint of Mexico and is thoroughly intertwined with modern-day Mexican Catholicism.

Today the Shrine serves as a history and art museum. The Archdiocese of Santa Fe's collection of Italian Renaissance paintings, Mexican baroque paintings, and Santos are on display. The star of the collection, however, is a large full-body image of Our Lady of Guadalupe depicting the 1531 apparition story.
Image by Bill Johnson on Wikimedia under Creative Commons License.