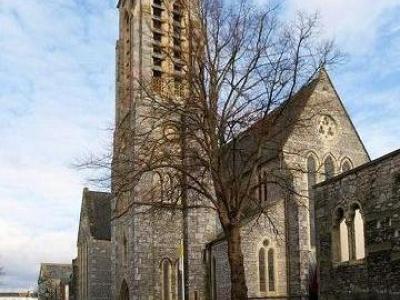 The Cathedral Church of Saint Mary and Saint Boniface is the seat of the Bishop of Plymouth and mother church of the Roman Catholic Diocese of Plymouth, which covers the counties of Cornwall, Devon and Dorset.

The Diocese of Plymouth was created in 1850, but it has a Pro-cathedral, Saint Mary. In 1858 the Cathedral was built merging the Church of Saint Mary and the Church of Saint Boniface. On February 20, 1856, William Vaughan from Bristol bought a portion of land on the town's outskirts. It cost £3,904: £1,000 from Mr Bastard and the remaining money was raised throughout the diocese and elsewhere in England. Joseph Hansom and Charles Hansom were the architects and local men from Stonehouse built it. Work commenced on June 22, during which a Royal Navy officer fired new Turkish Man-of-war guns in Plymouth Sound, which caused subsidence. The Cathedral was opened with Mass on March 25, 1858 (the Feast of the Annunciation), and consecrated by Bishop Vaughan on 22 September, 1880.
Image by St Boniface's Catholic College on Flickr under Creative Commons License.
Sight description based on wikipedia