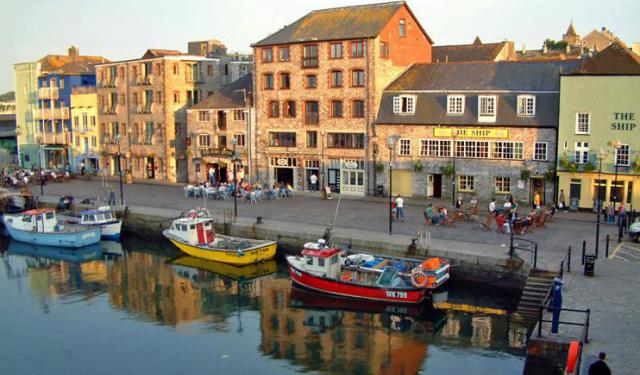 Plymouth, one of Britain's most prominent cities, boasts a great maritime heritage and a number of landmarks of both aesthetic and historic value. Barbican district – home of the Mayflower Steps, a place from where the Pilgrim Fathers embarked on their voyage to America in 1620; and the Sutton Harbour - home to the National Marine Aquarium, are just some of them. The following orientation walk will guide you through Plymouth's most notable sights so you can appreciate this jewel of a city in its diversity.
Image Courtesy of Wikimedia and Ebitart.
How it works: Download the app "GPSmyCity: Walks in 1K+ Cities" from iTunes App Store or Google Play to your mobile phone or tablet. The app turns your mobile device into a personal tour guide and its built-in GPS navigation functions guide you from one tour stop to next. The app works offline, so no data plan is needed when traveling abroad.

In the heart of the city stands this grandiose monument to Victorian art. The interior of the Guildhall is just as imposing as its fantastic facade. Plymouth's most important historic events are depicted on a set of stained glass windows. In the main hall hangs a Gobelin tapestry, portraying Raphael's 'Miraculous Draught of Fishes' – a present from Napoleon III.
Image Courtesy of Wikimedia and Ebitart.
2

As was usual in British synagogues, there is a prayer board with the Hebrew prayer for the welfare of the Royal family. The prayer board at Plymouth dates from 1762. It was usual for the name of each new king to be painted over the names of previous monarchs. At present the names being prayed for are listed as King George V and Queen Mary.

Image Courtesy of Wikimedia and Nilfanion.
Sight description based on Wikipedia.
3

This beautiful 16th century residence was the home of several Plymouth mayors. The house is currently a magnificent display of various artifacts in its four mini museums. Old curiosities, a Victorian schoolroom, Blitz room and Edwardian pharmacy provide an exclusive glance into Plymouth's vibrant history.

Black Friars Distillery, England's oldest operating gin distillery, is the proud home of Plymouth Gin since 1793. The building was erected in the early 15th century, and the Refectory - oldest part of the building, still has the original Medieval hall and timber roof. Regular guided tours will make you a true connoisseur of the art of gin-making and of course, of everything pertaining to this world famous drink.
Image Courtesy of Wikimedia and Gernot Keller.
5

The Mayflower Steps are close to the site in the Barbican area of Plymouth, from which the Pilgrim Fathers are believed to have finally left England aboard the Mayflower, before crossing the Atlantic Ocean to settle in North America on 6 September 1620. The traditional site of their disembarkation in North America is Plymouth Rock. The passengers who came predominantly from East Anglia sought religious and other freedoms. They had no links with Plymouth, but because of bad weather in the English Channel they were forced to put in at Plymouth seeking shelter and essential repairs.

Several surviving local buildings including what is now the Plymouth Gin Distillery in Southside Street and the Island House on the Quay are claimed to have accommodated some of them for one or more nights. The 'Steps' today consist of a commemorative portico with Doric columns of Portland stone that was built in 1934, and a small platform over the water with a brushed steel rail and a shelf with some nautical bronze artwork and historical information. It is on a small pier that was built about a century ago when some very old houses that were blocking construction of a road around the seaward side of the Citadel leading to the Hoe were cleared together with the significant Watch House. Today, boat trips leave the Mayflower Steps for trips around the Sound and up the Tamar for sight of the 'Dockyard and Warships'.
Image Courtesy of Wikimedia and Jabarney.
Sight description based on Wikipedia.
6

The Royal Citadel was built in the late 1660s to the design of Sir Bernard de Gomme. It is at the eastern end of Plymouth Hoe overlooking Plymouth Sound, and encompasses the site of the earlier fort that had been built in the time of Sir Francis Drake. During the Dutch Wars of 1664-67 King Charles II decided that it was necessary to realise the importance of Plymouth as a channel port. The original plan was to build a regular self-contained fort with five bastions, to the west of Drake's Fort, but this was revised to take in the earlier fort, resulting in the Citadel's irregular outline. Work began in March 1665, but it was not until 18 July 1666 that the foundation stone was laid by John Granville, 1st Earl of Bath. This stone, inscribed 'Jo Earle of Bathe 1666', is still in the wall facing the Hoe.

The Citadel is built of local limestone, while the English Baroque gateway, designed by Sir Thomas Fitz, is of Portland stone. The gateway was originally approached by a drawbridge over a dry moat, but these were removed with all the other outworks in the 1880s. The Royal Citadel was the most important English defence for over 100 years, with 70 ft high walls, and was regularly strengthened over the years, particularly during the 1750s when it was equipped with 113 guns. The Royal Citadel is still occupied by the military, being the base of 29 Commando Regiment of the Royal Artillery.
Image Courtesy of Wikimedia and Smalljim.
Sight description based on Wikipedia.
7

Smeaton's Tower is the third and most notable Eddystone Lighthouse. It marked a major step forward in the design of lighthouses. In use until 1877, it was largely dismantled and rebuilt on Plymouth Hoe, where it now stands as a memorial to its designer, John Smeaton, the celebrated civil engineer. Smeaton was recommended to the task by the Royal Society and he modelled the shape of his lighthouse on that of an oak tree, using granite blocks. He pioneered the use of "hydraulic lime," a form of concrete that will set under water, and developed a technique of securing the granite blocks together using dovetail joints and marble dowels.

Construction started in 1756 at a site in Millbay where Smeaton built a jetty and workyard in the south west corner of the harbour for unloading and working the stone. The work was completed in August 1759, at a cost of £40,000. Many of the men employed in the construction were Cornish tin miners, and to avoid the possibility of press ganging, which was rife at the time, Trinity House arranged with the Admiralty in Plymouth that each man was issued with a medal to confirm that they were working on the lighthouse. Smeaton's tower has been a Grade I listed building since 1954. It is open for visitors who may climb the 93 steps, including steep ladders, to the lantern room and see the views of Plymouth Sound and the city.
Image Courtesy of Flickr and Robert Pittman.
Sight description based on Wikipedia.

A breath-taking panorama, no trip to Plymouth is complete without a visit to Plymouth Hoe. With unbeatable views across Plymouth Sound, it’s the perfect place to spend a sunny day, enjoying a picnic on the grass or taking a dip in the art deco Tinside Lido. ***PH***