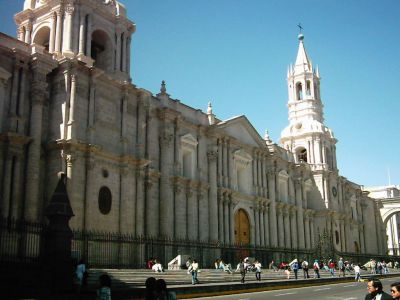 Cathedral of Arequipa, Arequipa (must see)

The only cathedral in Peru to stretch the length of the plaza it is situated on, The Basilica Cathedral of Arequipa is the most important place of worship in the city. The original structure dates back to the mid-17th century. Although there were some modifications made after the cathedral suffered from a fire and an earthquake, it still looks beautiful and tells a fascinating story about the significance of religion in the colonial era. The interior of the cathedral is spacious and simply decorated. The high altar and twelve columns symbolizing the twelve apostles are made from Italian marble. The magnificent, large Byzantine candelabra lamp hanging above the altar was brought here from Spain. The huge organ imported from Belgium at the end of the 19th century is said to have been the largest organ ever brought to South America.
Image by Steven Burt on Wikimedia under Creative Commons License.

This sight is featured in a self-guided walking tour of Arequipa, Peru within the mobile app "GPSmyCity: Walks in 1K+ Cities" which can be downloaded from iTunes App Store or Google Play. Please download the app to your mobile phone or tablet for travel directions for visiting this sight. The app turns your mobile device to a personal tour guide and it works offline, so no data plan is needed when traveling abroad.

Arequipa is a vibrant city with streets full of life. The city's rich colonial past and colorful traditions make for a fun, exciting visit. The following walking tour will take you to Arequipa’s most popular local spots.