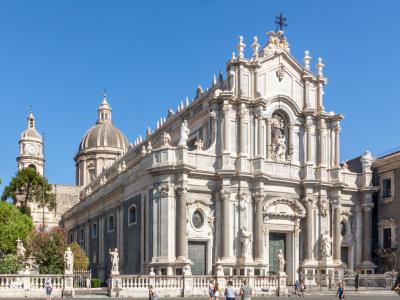 Cathedral of Catania, Catania (must see)

The Cathedral of Catania, entitled to St. Agatha, is a church in Catania constructed in 1078-1093, on the ruins of the ancient Roman Achillean Baths, by order of Roger I of Sicily, who had conquered the city from the Islamic emirate of Sicily. At the time it had the appearance of a fortified church (ecclesia munita).

In 1169 it was nearly entirely destroyed by an earthquake, leaving only the apse area intact. Further damage was introduced by a fire in 1169, but the most catastrophic event was the 1693 earthquake, which again left it mostly in ruins. It was subsequently rebuilt in Baroque style. Today, traces of the original Norman edifice include part of the transept, the two towers and the three semicircular apses, composed of large lava stones, most of them recovered from imperial Roman buildings. The current appearance of the church date to the 1711 century design of Gian Battista Vaccarini, who designed a new Baroque façade after the 1693 earthquake. It has three floors with Corinthian columns, in granite, perhaps taken from the Roman Theatre of the city. All the orders are decorated with marble statues of St. Agatha over the gate, St. Euplius on the right and St. Birillus on the left.
Image by Stefano Mortellaro on Wikimedia under Creative Commons License.
Sight description based on wikipedia