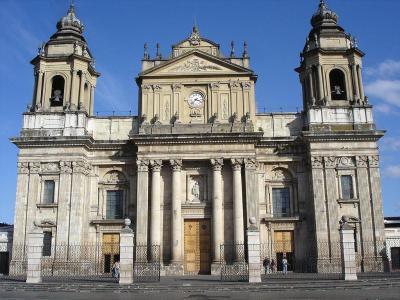 The Cathedral of Guatemala City, also Metropolitan Cathedral is the main church of Guatemala City and of the Archdiocese of Guatemala (Archidioecesis Guatimalensis). It is located at the Parque Central in the center of the city. The main body of the church was built between 1782 and 1815 while the towers were completed in 1867. Its massive structure incorporates baroque and classical elements and has withstood numerous earthquakes. Damage by the devastating earthquakes of 1917 and 1976 has been repaired.

The inside of the cathedral is relatively sparsely decorated but impresses by its size and its structural strength. The altars are ornate and decorative. In front of the cathedral stand a series of 12 pillars, solemnly remembering the names of thousands of people forcibly disappeared or murdered during the counterinsurgency violence of Guatemala's internal armed conflict, which began in 1960 and lasted until the final peace accord was signed in 1996.
Image by Ekem on Wikimedia under Creative Commons License.
Sight description based on wikipedia