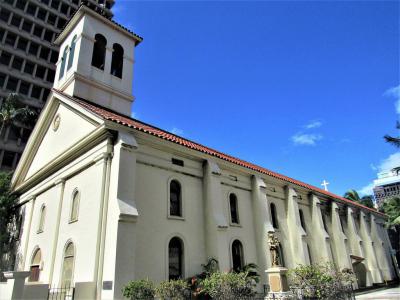 Cathedral of Our Lady of Peace, Honolulu

The Cathedral of Our Lady of Peace is one of the few cathedrals in Hawaii. It is the Mother Church of the Roman Catholic Diocese of Honolulu, and was build during Hawaii's missionary era. It was completed in August, 1843. When Libert Boeynaems inherited the church, he envisioned it as a grand Gothic cathedral, akin to those in Europe. Under his auspices, the church's first renovation occurred. An elaborate porch was build on the facade, the wooden spire was stripped down and a concrete bell tower put up in its place. These changes didn't last, however, and Stephen Alencastre stripped the Gothic accoutrements as soon as he assumed the episcopacy in 1926. He was the one who established the church's current style.

The ground-breaking for the Cathedral didn't come easily. For many years, the Roman Catholics on Hawaii were persecuted by powerful Congregational and Presbyterian ministers who were close to the royal family. Finally, the Hawaiian government issues an Edict of Toleration, and King Kamehameha III gave the Roman Catholic missionaries a parcel of land to build on. The building is a Romanesque cathedral, built out of blocks of coral stone, and adorned with acacia koa, marble, plaster, and terra cotta. There are seventeen stained glass designs, statues of saints, and many pieces of religious art worth seeing, for Catholics and non-Catholics alike.
Image by Blahedo on Wikimedia under Creative Commons License.
Sight description based on wikipedia