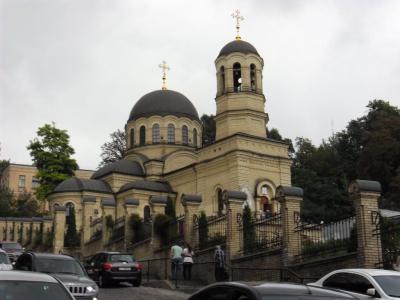 Michael of Kiev was the first Ukrainian metropolitan of the Orthodox Church. He arrived in Ukraine from Russia in 988 to baptise pagans, preach the Bible, and spread the name of God on the newly acquired Russian lands. Michael is credited with building schools and churches all over the current Ukraine and, after his death in 992, was sanctified.

The Cathedral of Prelate Metropolitan Michael of Kiev was built in 1895 as a chapel for the Alexander Hospital, which was built for the poor through public subscription in 1874. Its centre altar was dedicated to Michael of Kiev, while the other two chapels bore the names of Zechariah and Elizabeth. After the 1917 Revolution, the cathedral was closed and the hospital was nationalized and renamed after the Great October Socialist Revolution. On the Easter Day of 1930, the building was destroyed. Its foundation and basement are the only parts that have survived until today. The cathedral’s restoration began in the year 2000 and was completed in 2002.
Image by miriam.mollerus on Flickr under Creative Commons License.