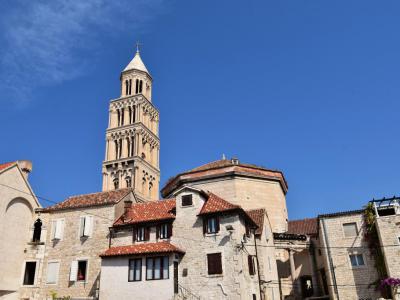 It was the year 305. Roman emperor Diocletian had persecuted a lot of Christians and like-minded dissidents in his Imperial tour of duty. Now it was time to retire to his native land of Dalmatia and raise vegetables. As the vegetables were growing, he built a mausoleum. His final resting place was in the center of Split. But he would not rest there forever.

St. Domnius is the patron saint of Split. He was the Bishop of Salona, a Roman city and capital of Dalmatia. He was born in Antioch and he was beheaded, along with seven other Christians, in 304. Ironically, he died one year before Diocletian retired.

Diocletian was a soldier. Naturally his retirement home was a Roman army camp. There was an East-West road (decumanus) and a North-South road (cardo maximus). Those roads remain in Split today. At the intersection of the roads is a great peristyle which grants access from the east to the Cathedral of St. Domnius.

The Cathedral evolved through three stages. Diocletian's Mausolem, the central part of the cathedral, dates from the end of the third century. It is composed of white marble, limestone, and brick. In the seventh century a choir was added to the mausoleum. Finally the bell tower was erected in 1100. There was further rebuilding in 1908.

Within the Church there are relics and art treasures. Found here is the 13th century panel Painting, Madonna and Child. There are reliquaries, chalices and vestments from the 13th to the 19th centuries. The library includes the Book of gospels (6th century), Kartularium from Sumpetar (11th century) and the Historia Salanitana (13th century).

Why you should visit: To take in the ancient, medieval and modern Split all in one place.
Image Courtesy of Flickr and Richard Mortel.