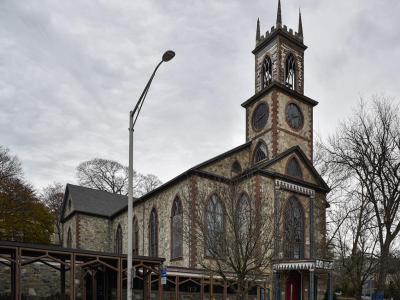 The cornerstone for St. John's Church was laid in 1810 and the church was dedicated in 1811. The building was designed by Federal-era architect John Holden Greene, who designed many buildings in Providence. A Cathedral corporation was formed in 1909 and in 1929, the church was designated the Episcopal seat. The building was renovated in 1855, 1866, 1906, and 1967, and still retains its architectural integrity, but is in a state of deterioration and was listed on the Providence Preservation Society 10 Most Endangered Properties List in 2007, 2008 and 2010.
Image Courtesy of Wikimedia and Filetime.
Sight description based on Wikipedia.