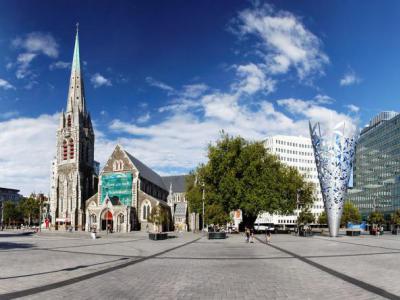 During the earthquake that hit Christchurch in February 2011, Cathedral Square - the geographical center of the city - suffered serious damage. The square has been named after the Anglican cathedral that once stood here. In 1867, a statue of John Robert Godley, the city's founder, was unveiled on a pedestal opposite the cathedral. This was the first public statue in all of New Zealand. The square was the city's main meeting place and was a regular venue for street performers and public speakers of various kinds. In 2000, The Chalice, a large piece of modern sculpture in the form of an inverted cone, was installed here subverting the shape of the spire that rises above the cathedral. Designed by prominent New Zealand artist Neil Dawson, The Chalice has survived the earthquake unaffected. It is made up of forty-two leaf patterns featuring different native plants. Today, Cathedral Square is closed for reconstruction.
Image by Misaochan on Wikimedia under Creative Commons License.

Want to visit this sight? Check out these Self-Guided Walking Tours in Christchurch. Alternatively, you can download the mobile app "GPSmyCity: Walks in 1K+ Cities" from iTunes App Store or Google Play. The app turns your mobile device to a personal tour guide and it works offline, so no data plan is needed when traveling abroad.