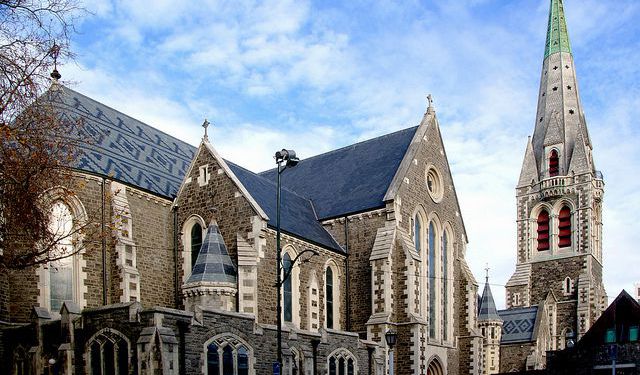 Christchurch, a "piece of England" down under, situated on New Zealand’s South Island, was heavily battered by 2010 and 2011 earthquakes, claiming many of the city's historic sights. Today Christchurch still comes to terms with those losses. Among the key attractions still in place are a good number of old-time landmarks, including the Christchurch Cathedral, the Edmonds Clock Tower, the Christchurch Town Hall and more. See what makes Christchurch a jewel of the English heritage in the southern hemisphere on this orientation walk.
How it works: Download the app "GPSmyCity: Walks in 1K+ Cities" from iTunes App Store or Google Play to your mobile phone or tablet. The app turns your mobile device into a personal tour guide and its built-in GPS navigation functions guide you from one tour stop to next. The app works offline, so no data plan is needed when traveling abroad.

During the earthquake that hit Christchurch in February 2011, Cathedral Square - the geographical center of the city - suffered serious damage. The square has been named after the Anglican cathedral that once stood here. In 1867, a statue of John Robert Godley, the city's founder, was unveiled on a pedestal opposite the cathedral. This was the first public statue in all of New Zealand. The square was the city's main meeting place and was a regular venue for street performers and public speakers of various kinds. In 2000, The Chalice, a large piece of modern sculpture in the form of an inverted cone, was installed here subverting the shape of the spire that rises above the cathedral. Designed by prominent New Zealand artist Neil Dawson, The Chalice has survived the earthquake unaffected. It is made up of forty-two leaf patterns featuring different native plants. Today, Cathedral Square is closed for reconstruction.
Image by Roger Wong on Flickr under Creative Commons License.
2

The city of Christchurch has evolved around this once imposing building. Located in Cathedral Square, this strikingly grandiose Anglican cathedral has been an inseparable part of the city since it was built in 1864. The construction had to be halted, at one point, due to financial difficulties, and was resumed in 1873. Christchurch Cathedral has been noted for a number of splendid architectural features: stained glass windows, wall panels, font, altar and bells.

Image by Achim on Wikimedia under Creative Commons License.
Sight description based on wikipedia
3

Another outstanding sight that embellishes Cathedral Square is the former Chief Post Office building. Construction began in 1877 and originally was meant to house governmental offices, but later became a Chief Post Office. Nowadays, it is the home of Tourist Information Center. The Italian style structure riffs off other landmarks in the square in an aesthetically pleasing way.
Image by Bernard Spragg. NZ on Flickr under Creative Commons License.
4

This grandiose memorial, unveiled in 1924, is dedicated to all the soldiers who fought in two World Wars. Designed by New Zealand architectural firm Prouse and Gummer, the bridge appears in the form of a white stone arch adorned with ornaments and sculptures and recreates the bridge through which the soldiers marched on their way to war. The Bridge of Remembrance joins the banks of the Avon river on Cashel Street. The memorial suffered great damage from the earthquakes that hit the town in 2011.
Image by Krzysztof Golik on Wikimedia under Creative Commons License.
5

City Mall is the main pedestrian mall in the central city of Christchurch, comprising two sections of Cashel Street plus the Bridge of Remembrance and one section of High Street. It is also known as Cashel Mall. The Bridge of Remembrance was pedestrianised in 1976. The main mall was closed to traffic on 11 January 1982 and formally reopened as a pedestrian mall on 7 August, but it was not until 1992 that the entire mall was paved. The mall was redeveloped between 2006 and 2009, and track was installed for an expansion of the heritage tram network.

City Mall contains or contained seven structures that are or were registered as historic places by Heritage New Zealand from which only Beaths Department Store Building (682–690 Colombo Street; corner Cashel Street) and Bridge of Remembrance (Between Oxford and Cambridge Terraces) are still standing.

Image by Paul & Rebecca on Wikimedia under Creative Commons License.
Sight description based on wikipedia
6

185 Empty Chairs, also known as 185 White chairs or 185 Empty White Chairs or simply as 185 Chairs, is an unofficial memorial for the 185 individuals who died in the 2011 Christchurch earthquake. Envisaged as a short-term installation made from chairs painted white, it has become a major tourist attraction in Christchurch, New Zealand. Installed at the day of the earthquake's first anniversary, it preceded the official earthquake memorial—the Canterbury Earthquake National Memorial—by five years.
Image by Bernard Spragg. NZ on Wikimedia under Creative Commons License.
Sight description based on wikipedia
7

The Cardboard Cathedral, formally called the Transitional Cathedral, is the transitional pro-cathedral of the Anglican Diocese of Christchurch, replacing ChristChurch Cathedral, which was significantly damaged in the 2011 Christchurch earthquake. The Cardboard Cathedral was designed by the Japanese architect Shigeru Ban and opened in August 2013. It is located on the site of St John the Baptist Church on the corner of Hereford and Madras Streets in Latimer Square, several blocks from the permanent location of ChristChurch Cathedral.

The building rises 21 metres (69 ft) above the altar. Materials used include 60-centimetre (24 in)-diameter cardboard tubes, timber and steel. The roof is of polycarbon, with eight shipping containers forming the walls. The foundation is concrete slab. The architect wanted the cardboard tubes to be the structural elements, but local manufacturers could not produce tubes thick enough and importing the cardboard was rejected. The 96 tubes, reinforced with laminated wood beams, are "coated with waterproof polyurethane and flame retardants" with two-inch gaps between them so that light can filter inside. Instead of a replacement rose window, the building has triangular pieces of stained glass. The building seats around 700 people. It serves as a conference venue as well as a cathedral.

The Wizard of New Zealand, one of the strongest critics of the Diocese for wanting to demolish ChristChurch Cathedral and who had been a daily speaker in Cathedral Square, called the design "kitsch".

Image by Tony Hisgett on Flickr under Creative Commons License.
Sight description based on wikipedia
8

Sited near Christchurch's city centre is an Edwardian style building - the seat of Isaac Theatre Royal. Originally built in 1863, a new theatre edifice was erected nearby in 1907 and remains the home to the Isaac Theatre to this very day. For over a century it has delighted spectators with wonderful classical performances.

Due to the damage caused by the February 2011 earthquake, the theatre was closed for nearly four years while the restoration took place. All of the significant architectural elements were rescued and restored by skilled craftsmen. The newly restored Theatre opened on 17 November 2014.
Image by Bernard Spragg. NZ on Wikimedia under Creative Commons License.
9

New Regent Street is a pedestrian mall in Christchurch. Built as a private development in the early 1930s with 40 shops in Spanish Mission architectural style, it is one of the city's major tourist attractions. Providing a number of small shops as a comprehensive development was an advanced idea at the time, and New Regent Street is regarded as a forerunner to modern shopping malls. Due to its coherent architectural character, the buildings in the streets are listed as Category I heritage items by Heritage New Zealand, and in addition, the entire street has a historic area listing.
Image by Bernard Spragg. NZ on Wikimedia under Creative Commons License.
Sight description based on wikipedia
10

The Margaret Mahy Playground is a playground in the Christchurch Central City on the banks of the Avon River. Following the 2011 Christchurch earthquake, the government's Recovery Plan had a "city-wide family playground" as one of the elements of the East Frame. The playground opened on 22 December 2015, and it is the largest playground in the Southern Hemisphere.
Image by Bernard Spragg. NZ on Flickr under Creative Commons License.
Sight description based on wikipedia
11

Once the city's main trading area, Victoria Square is a wonderful city park full of historic monuments. Formerly known as Market Square, it was renamed to mark Queen Victoria’s jubilee in 1900. The square's redevelopment as a park was completed in 1989. During the earthquake that hit Christchurch in February 2011, Victoria Square was damaged, and in some places, concrete has risen at least a metre. Despite the earthquake, you can still see a majestic statue of Queen Victoria, a statue of Captain James Cook, an amazing floral clock, and Dandelion fountains very much intact in the park.

The Cook Statue commemorates the three journeys of James Cook to New Zealand. The statue, sculpted by William Trethewey, was unveiled on 10 August 1932 by the Governor-General, Lord Bledisloe. It was donated by bookmaker and philanthropist Matthew Barnett (1861–1935).

A stroll and relaxation mecca for locals and tourists alike, this park is also a scene of some of the city's main public events.

Why You Should Visit:
Although not as crowded and large compared to other cities, it is still one of the interesting areas to visit in the town center.
A lovely place to sit on a lunch break or take a relaxing evening stroll near the river.
Image by Chris Betcher on Wikimedia under Creative Commons License.
12

Quake City is a special exhibition developed and operated by Canterbury Museum.

Quake City was devised in response to high interest from leading business and community groups to having an earthquake experience in Christchurch, following Canterbury Quakes, a temporary exhibition held at the Museum in 2012.

The exhibition is a significant example of the Museum’s role in the community as a kaitiaki (guardian) of Canterbury’s history and taonga (treasures) and to the stories that shape the social and natural history of the region.

Commissioned in 1855 by the Provincial Government, Hagley Park is the largest urban open space in Christchurch. Centrally located and bounded by the Avon river and nearby roadways, the park is distinguished for the many trees and broad open valleys. The Christchurch Botanic Gardens are located within this loop and frequent bridges provide connections. The Gardens contain a collection of beautiful flowers and trees from around the world. Many visitors also come to the park to see its thronging wildlife, including thousands of birds. Due to the earthquakes that hit the area in 2011, Christchurch City Council has closed the Botanic Gardens glasshouses: Fern House and Foweraker House, Gilpin and Garrick House, Townend House, and Cunningham House.
Image by Bernard Spragg. NZ on Flickr under Creative Commons License.