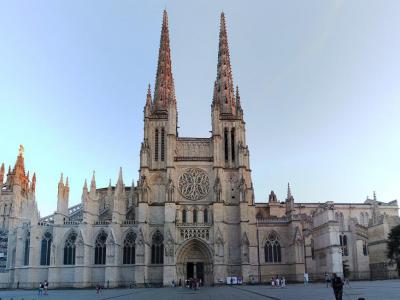 The Saint-André Cathedral, often known simply as Bordeaux Cathedral, is located at Place Bey Berland in the heart of Bordeaux city center. The Roman Catholic Cathedral of Saint-André was consecrated in 1096 by Pope Urban II; however, only a wall within the nave remains of the original Romanesque structure. The majority of the building has survived from the 14th & 15th centuries. The cathedral’s famous Royal Gate dates to the early 13th century. The entire building, including the separate bell tower, the Tour Pey Berland, is listed as a French national monument.

The cathedral has played its part in the history of Bordeaux. In 1137, 13 year old Eleanor of Aquitaine, one of the region’s most famous historical figures, married Prince Louis VII in the cathedral. Within a few months, they became King & Queen of France, but their marriage was annulled in 1152. Eleanor went on to marry Henry II, a future king of England, and became Queen of England, and mother of King Richard the Lionheart and King John of England.

The cathedral boasts two Gothic towers above the main entrance, in addition to the vertiginous bell tower directly adjacent to the main building. Still an active place of worship, it holds mass each Sunday and is still the seat of the Archbishop of Bordeaux-Bazas – a position once held by Pey Berland, after whom the bell tower and surrounding square are named.

Why You Should Visit:
French cathedrals have grandeur & splendor in abundance, and this one is top of the pile, with well-preserved interior decoration and design.
The bell tower, which stands separate from the cathedral, is also worth pointing out as the views from the top are worth the effort of the climb up.

Tip:
There is no entry fee, but they do take donations.
If you walk in, make sure you look to the right, to the back and admire the giant organ pipes.
To appreciate the cathedral from a different perspective, climb the Pey Berland tower nearby.