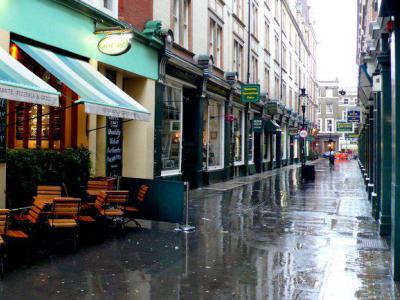 Just off Charing Cross Road - the first lane on the right as you walk up the street - is a small charming thoroughfare, one of the oldest in London, known as Cecil Court. This picturesque one-block pedestrian street, lined with quirky Victorian-era shop fronts, is credited with having provided inspiration to J.K. Rowling for creating Diagon Alley, which is easy to believe given the presence of rather eccentric shops here, including some fittingly specialized in magical or psychic literature, like the one called “The Witch’s Ball”.

Generally, at these stores you will find anything, from rare editions and second-hand books, collector’s copies and first-editions, to old stamps, maps, posters, banknotes and other antiques. Marchpane, a children’s bookstore, even carries the rare signed copies of Harry Potter books. The whole street feels so eerily similar to Diagon Alley that one may half expect to stumble across Ollivanders Wand Shop or a pint of Butterbeer!
Image by Nigel Mykura on Wikimedia under Creative Commons License.