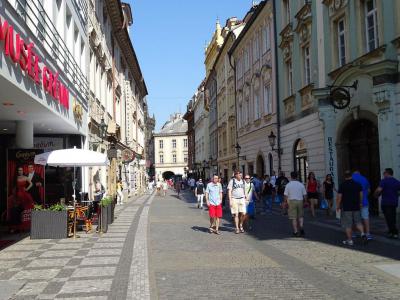 No visit to Prague is complete without a walk along this lively pedestrial lane, part of the medieval Royal Road that was once a coronation route from the Old Town to Prague Castle. One of the city's oldest streets, it was named after the plaited bread rolls that used to be sold to the public here while they waited to watch the nobles pass by on their way to the Castle. Today, the street is lined with a myriad of souvenir shops, cafés and restaurants, mixed up with beautiful murals, facades, and important pieces of architecture, including the aesthetically pleasing Black Madonna House. In Prague it is difficult not to start a photo collection of house signs, and if you have become an aficionado, you will love Celetná!

Most of the buildings here have kept their Gothic or Romanesque vaulted cellars, except "at the Black Madonna" which is Prague's first Cubist building. Manhart Palace or "at the Goats" is owned by the Theatre Institute and the Theatre in Celetná; "at the Black Sun" is an early Gothic house with Baroque façade restored in the 18th century; "at the Three Kings" (#3) has an excellent café and wine tasting room (Kafka lived there for a short time, too); while "at the Golden Deer" was once a "rattle" post office, from which letters were delivered all over Prague – the postmen used to rattle chains outside houses to signal the arrival of a letter for the occupant. Other house signs include "at the Comb", "at the Czech Eagle" and "at the Golden Angel" (#29), which used to operate as an inn and extended its hospitality to revered guests, such as Mozart.

Bustling with activity during the day, Celetná reverts to one of Prague's most romantic streets at night.
Image by ŠJů on Wikimedia under Creative Commons License.