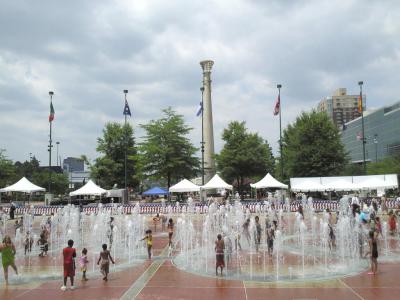 Built by the Atlanta Committee for the Olympic Games (ACOG) as part of the infrastructure improvements for the Centennial 1996 Summer Olympics, this park plays host to millions of visitors a year and several events, including a summer popular music concert series (Wednesday WindDown) and an annual Independence Day concert and fireworks display. It covers 21 acres (85,000 sq m) and can be divided into The Great Lawn, Centennial Plaza, and the Visitor Center.

A key feature is the interactive Fountain of Rings which features computer-controlled lights and 251 jets of water synchronized with music played from speakers. An important formal architectural landmark that is also a fun and playful space, the computer-controlled fountain concept has since been replicated in other urban designs such as Toronto's Dundas Square and in commercial uses such as the Bellagio Fountains at the Bellagio Hotel & Casino in Las Vegas, Nevada.

Apart from the light towers reminiscent of classical Greek marker columns, the fountain area is surrounded by flags representing the host countries of each Summer Olympics preceding the 1996 games. Scattered throughout are also several pieces of sculpture, including a statue of Pierre de Coubertin, father of the modern Olympic movement.

Why You Should Visit:
Relaxing environment, family-oriented, clean restrooms, nice atmosphere.
City views from the main lawn and nice shade by the waterfalls and rocks.
The fountains are great fun for kids and a favorite backdrop for photographers.

Tip:
If adventurous wear your swimming suit and cool off in the fountains. Your visit should otherwise start at the Visitor Information Center (pick up a walking tour map, or get the online version for your phone).