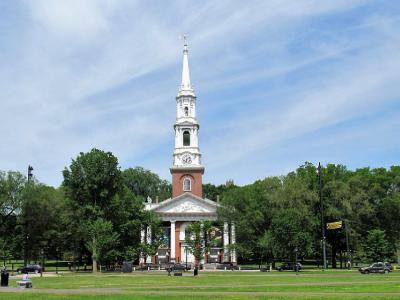 The Center Church of the Green, also known as The First Church of Christ (United Church of Christ / Congregational), is the middle church of the three located just near the New Haven Green Park. It was established in 1639. The present Georgian-style building was constructed in 1812, designed by architect Ithiel Town.

The church is famous for housing The Crypt, located in its basement, containing the identified remains of about 137 people, plus another 1,000+ of the unidentified ones, with gravestones dating back to 1687-1812, which is one of the rare colonial burial grounds preserved intact. The oldest dated stone there (1687) is that of Sarah Rutherford Trowbridge.

*** Amistad Freedom Trail ***
Back in the mid-19th century, this church congregation was actively involved in supporting the Mende African captives during the Amistad incident and were particularly instrumental in gaining support for the Africans held in the New Haven Jail.
Image Courtesy of Wikimedia and Farragutful.
Sight description based on Wikipedia.