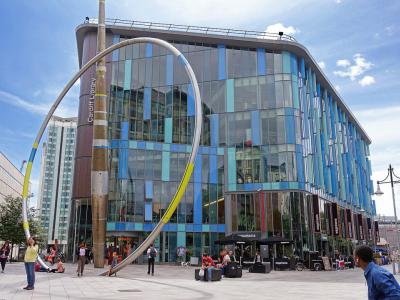 Cardiff Central Library is the main library in the city centre of Cardiff. Four buildings have been named as such, with the newest building opening on 14 March 2009 and officially being opened a few months later on 18 June 2009 by the Manic Street Preachers. The first Cardiff library was opened in 1861 as the Cardiff Free Library, later expanded and known as the Cardiff Free Library, Museum and Schools for Science and Art.The present day Central Library building is located on The Hayes, cornered in between Mill Lane and Canal Street, opposite the St. David's 2 development. The library contains 55,000 ft (17,000 m) of space, 90,000 books, 10,000 of which are written in Welsh, and an additional 10,000 CDs and DVDs.
Image Courtesy of Wikimedia and Tiia Monto.
Sight description based on Wikipedia.