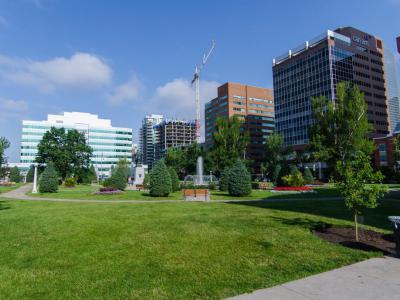 Also referred to as Memorial Park or Central Park, the Central Memorial Park is in Beltline district, Calgary. At this park, you will find the Memorial Park Library, a cenotaph and R.L. Boyle’s equestrian statue.

This park is spread over 18,900 square meters over an entire city block. It was designed in the year 1889 in Victorian style landscape. Central Memorial park was reopened in May 2010 after it underwent a big budget renovation between 2008 and 2009.

Today it is a hub of exciting activities as many locals and tourists come here to spend enjoyable time. Do not miss out the Boer War monument on your visit to this park. This monument is unique in the sense that you will not find the name of R.L. Boyle, whose statue is here, inscribed on the monument.

This is because, the statue stands as a memorial for all those who fought and sacrificed their lives in the Second Boer War and not exclusively commemorating R.L. Boyle. You will find an inscription of only the dates 1899-1902 on the pedestal.

After the war, another statue of a common First World War soldier was erected outside the Memorial Park by the Imperial Order of the Daughters of the Empire. You can find this statue still standing outside the library section of the park.
Image by Brian Chow on Flickr under Creative Commons License.