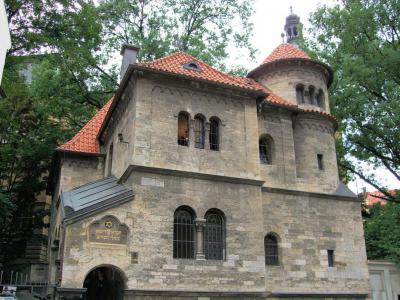 Right next to the Klausen Synagogue in the Jewish Quarter is a building that resembles an old castle or, perhaps, a grand manor house. This is the Ceremonial Hall and you’ll probably ask yourself as to what wonderful story may be associated with it. Sadly, the answer is – none, really.

The Hall was built in 1912 to the design by architect J. Gerstl in a pseudo-Romanesque style. It was given to the Jewish Burial Society and was once a ceremonial hall and mortuary, where important members of the Jewish society were taken to be prepared for burial. This is one of the buildings in the area that the Nazi’s left untouched during their occupation, as it was destined to become part of their “Museum to an Extinct Race”.

Today it belongs to the Jewish Museum and holds permanent exhibitions, including one devoted to illness, death and graphic descriptions of ancient burial rites, along with the examples of gravestones, tombs, memorials and paintings donated by the Burial Society.

The other exhibition is less morbid; it represents Part II of the Jewish Customs and Traditions Exhibition (Part I is in the Klausen Synagogue) and deals with the everyday life of the Jewish households throughout centuries. It is a very interesting, instructive exhibition and is well worth visiting.
Image by Jim Linwood on Wikimedia under Creative Commons License.