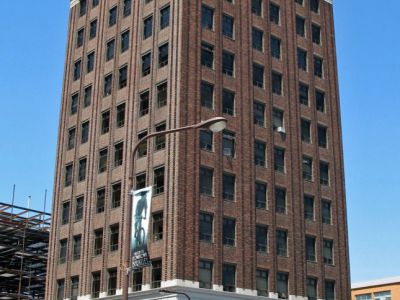 The building, completed in 1927, was named after the Chamber of Commerce due to the fact that the Chamber occupied the top floor. For many years, the building housed the American Trust Company. Today, it is home to Wells Fargo Bank.

The Central Berkeley Building Company funded the construction of the Chamber of Commerce Building in part to influence the state government to move the capital from Sacramento to Berkeley. The ploy was partially successful. The legislature placed the motion on a ballot in 1908. The voters chose against the move.

The Chamber of Commerce Building is on the National Register of Historic Places. Despite restorations over the years, the building is almost entirely original. The only significant changes were to the roof sign, which was removed in 1962, and the wood storefront that was replaced with bronze anodized aluminum in 1978.
Image by Sanfranman59 on Wikimedia under Creative Commons License.