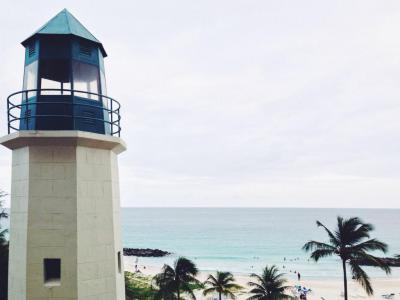 The Chamberlain Bridge is a bridge in Bridgetown, the capital and largest city of the nation of Barbados. In 1872, it was a draw bridge or swing bridge across the marine inlet channel of the Careenage River (Constitution River) at Carlisle Bay.

The archaic steel structure was dismantled and rebuilt in 2005–2006 as a lifting bridge with the state-of the-art modern technology of an all-composite single-leaf bascule design. This design is a counterweighted bridge span that pivots upward, permitting ships to pass through an inlet channel. The bridge was built using fibre-reinforced plastic (FRP), which is lighter, long lasting and non-corrosive. There are two bridges in use in Bridgetown. The Charles Duncan O'Neal Bridge is large and modern in design, commencing from the National Heroes Square, while Chamberlain Bridge is the more "decorative humpbacked bridge" built to replace the original swing bridge after the Great Hurricane in 1898 with funds generated through the efforts of the then British Colonial Secretary, Joseph Chamberlain (1836–1914).
Image by regani on Wikimedia under Creative Commons License.
Sight description based on wikipedia

Want to visit this sight? Check out these Self-Guided Walking Tours in Bridgetown. Alternatively, you can download the mobile app "GPSmyCity: Walks in 1K+ Cities" from iTunes App Store or Google Play. The app turns your mobile device to a personal tour guide and it works offline, so no data plan is needed when traveling abroad.