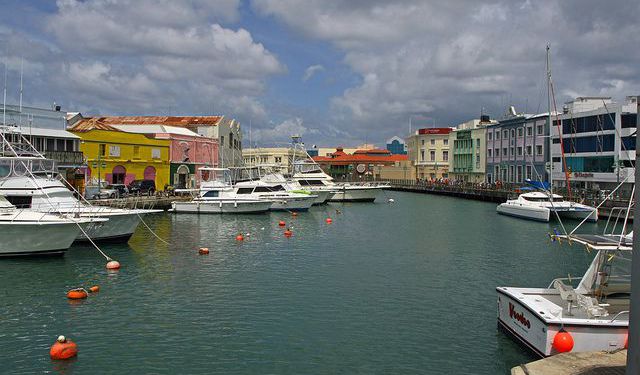 Image by Carolyn Sugg on Flickr under Creative Commons License.

If you knew that Bridgetown was famous for its duty-free shopping, then guess what? - This is not all the city can boast of! There is a plethora of other things in Bridgetown fit to sparkle one's interest, and local landmarks are just one of them. Going by the obvious British influence present in the sculpture and architecture, one might think they are in London, but no - this is Barbados! Follow this orientation walk and discover Bridgetown's top attractions for yourself!
How it works: Download the app "GPSmyCity: Walks in 1K+ Cities" from iTunes App Store or Google Play to your mobile phone or tablet. The app turns your mobile device into a personal tour guide and its built-in GPS navigation functions guide you from one tour stop to next. The app works offline, so no data plan is needed when traveling abroad.

Independence Square is a recently built recreational square, which extends over an area of approximately 50,000 sq. ft. It comprises two wonderful fountains and a 9 ft bronze statue, which was sculpted in honour of the Father of Independence in Barbados - Errol Barrow. The area, which is covered today by the square, used to be a place for political meetings, where Barrow was also present.
Image by Robert English on Flickr under Creative Commons License.
2

The Independence Arch is a valuable piece of architecture, which was built with the purpose of commemorating the 21st Anniversary of Barbados’ Independence. Built in 1987, it was adorned with images of National Emblems characteristic of Barbados and there are also some interesting facts referring to the Independence of Barbados inside the Arch.
Image by Postdlf on Wikimedia under Creative Commons License.
3

The Chamberlain Bridge is a bridge in Bridgetown, the capital and largest city of the nation of Barbados. In 1872, it was a draw bridge or swing bridge across the marine inlet channel of the Careenage River (Constitution River) at Carlisle Bay.

The archaic steel structure was dismantled and rebuilt in 2005–2006 as a lifting bridge with the state-of the-art modern technology of an all-composite single-leaf bascule design. This design is a counterweighted bridge span that pivots upward, permitting ships to pass through an inlet channel. The bridge was built using fibre-reinforced plastic (FRP), which is lighter, long lasting and non-corrosive. There are two bridges in use in Bridgetown. The Charles Duncan O'Neal Bridge is large and modern in design, commencing from the National Heroes Square, while Chamberlain Bridge is the more "decorative humpbacked bridge" built to replace the original swing bridge after the Great Hurricane in 1898 with funds generated through the efforts of the then British Colonial Secretary, Joseph Chamberlain (1836–1914).

Image by regani on Wikimedia under Creative Commons License.
Sight description based on wikipedia
4

The Empire Theater was the first one in Bridgetown to present motion picture, so it basically has served as a multi-functional building since 1922, when it was opened. It had 859 seats and was a single screen venue; unfortunately its “lifespan” ended around 1975. The theater’s colonial revival structure makes it quite a unique finding in Bridgetown’s centre.
Image by Ken Roe and John Leach on Flickr under Creative Commons License.
5

Image by Charlie Dave on Flickr under Creative Commons License.
Sight description based on wikipedia
6

The Parliament Buildings (also known as The Public Buildings, or more rarely Parliament House), is the seat of the Parliament of Barbados. Built between 1870 and 1874, the buildings have been the meeting place for both chambers of Parliament since 16 June 1874, and a former site of Colonial administration of Barbados.

It consists of two buildings which poses neo-Gothic architectural style, and are reminiscent of the Victorian era of Great Britain. The buildings are situated along, the north bank of the Constitution River and are bordered by Upper Broad Street and National Heroes Square to the south; strategically at the heart of the capital city Bridgetown. Prior to the establishment of the buildings the legislature met at the Town Hall building on Coleridge Street. In 1989 the Public Buildings were officially renamed the Parliament Buildings by Act of Parliament. In 2011 both buildings were designated as UNESCO protected properties within the World Heritage Site of Historic Bridgetown and its Garrison area.

Image by regani on Wikimedia under Creative Commons License.
Sight description based on wikipedia
7

The Statue of Lord Horatio Nelson gives Bridgetown a little touch of England. Actually it was built before London's Lord Nelson column, in 1813. This majestic bronze statue was made by the well known sculptor Sir Richard Westmacott. It is located in Heroes Square, formerly known as Old Trafalgar Square. It is, undoubtedly, something that one would not have imagined to be in Bridgetown.
Image by regani on Wikimedia under Creative Commons License.
8

The street that will blow up your mind, in shopping terms, of course, is Broad Street. This area is a mix of malls and duty free shops, where you will be able to purchase jewelry, watches, tobacco products, perfume, rum, antiques, gifts and almost everything. Be sure to check out Sunny Shoes, which is another renowned shop on Broad Street. Most of the shops are closed on Sundays.
Image by BasL on Flickr under Creative Commons License.
9

Built in 1654, it was destroyed by a hurricane in 1831, was rebuilt, fell into disrepair until it was sold in 1929. Haim Isaac Carigal was in Barbados, perhaps acting as rabbi of the congregation, at the time of his death in 1777. About 300 Jewish people of Recife, Brazil, persecuted by the Portuguese, settled in Barbados in the 1660s. Skilled in the sugar industry, they quickly introduced the sugarcane crop and passed on their skills in cultivation and production to the Barbados land owners. With their help, Barbados went on to become one of the world's major sugar producers and one of the richest European territories in the West Indies. The Nidhe Israel Museum was opened in 2008.
Image by NYC2TLV on Wikimedia under Creative Commons License.
Sight description based on wikipedia
10

Cheapside Public Market is the biggest market of its kind in Barbados and is a main feature of activity in Bridgetown.
Image by Meg Stewart on Flickr under Creative Commons License.
11

Pelican Craft Centre is a unique place where you will find only 100% Barbadian made items. The centre is renowned throughout the island of Barbados for its amazing, creative craft work. If you are looking for the perfect souvenir, this is your top choice; you will find carvings, glass art, paintings, pottery and other fine works. Do not miss the “performances” of the talented craftspersons, who make their pieces of art right on the spot.
Image by brasscutter on Flickr under Creative Commons License.