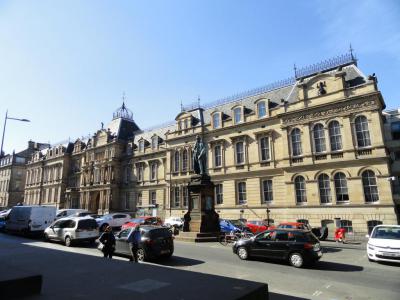 Chambers Street lies to the south of the Old Town. It was named after the Lord Provost of Edinburgh, William Chambers of Glenorminston, a statue of whom stands in the centre of the street.

Chambers is lined with beautiful old buildings of great interest among which is the Old College of the University of Edinburgh built in 1791, predating the street itself. It now houses the Talbot Rice Gallery, with temporary exhibitions in the White Room, the Torrie Collection of Old Masters in the Georgian Gallery, and small exhibitions and experimental projects in the Round Room.

In the Royal Museum, which was built in 1888, you can admire the Wylam Dilly steam locomotive that dates back to 1813. Adam House is also open to the public and it holds the Discover Science family experience created by the University of Edinburgh.

Chambers Street is also home to the marvellous Museum of Scotland. Among its exhibits there are part of the St Ninian’s Isle Treasure, 11 of the Lewis Chessmen (the others are kept in the British Museum), a collection of Pictish stones, Celtic brooches, and an early form of guillotine named “The Maiden”. You will also find the perfectly preserved body of “Dolly”, the first mammal in the world to be cloned.
Image by Damien on Flickr under Creative Commons License.