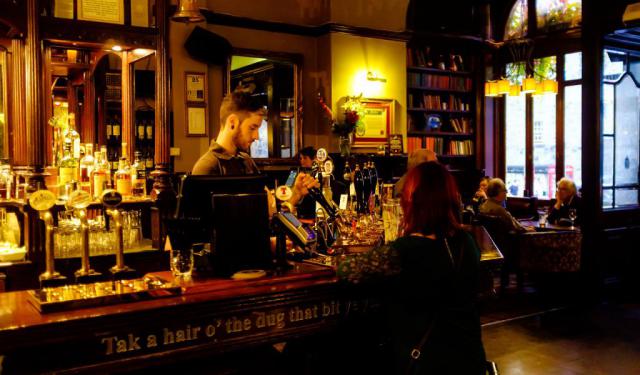 Edinburgh is known for its sheer number of pubs, both old and new, suitable for various events, and spoiling their patrons with the best drinks and food in town. Many of them also have live music shows fit to delight locals and tourists alike, and although most traditional pubs are laid back and offer a quiet and relaxing atmosphere, some do have dance floors and double as nightclubs. Take this self-guided tour to discover the most popular pubs in Edinburgh!
Image Courtesy of Flickr and Christiane Birr.
How it works: Download the app "GPSmyCity: Walks in 1K+ Cities" from iTunes App Store or Google Play to your mobile phone or tablet. The app turns your mobile device into a personal tour guide and its built-in GPS navigation functions guide you from one tour stop to next. The app works offline, so no data plan is needed when traveling abroad.

A thirsty history buff in Edinburgh, looking for a pub steeped in history, should look nor further than The World’s End on the Royal Mile.

This old watering hole takes its name from the 16th century when the City Walls surrounded Edinburgh. Following the Battle of Flodden which saw Scotland’s defeat by the English, Edinburgh had to wall itself for protection. The gates in that wall were situated right outside the pub, reminding of which today are the brass cobbles in the road, marking their exact location. In the opinion of the Edinburgh folk, the world outside the gates was no longer theirs, so they called it The World’s End.

The “old style” character of the pub proves to be its main lure for tourists walking the cobbled streets and anxious to quench their thirst. Venturing inside the tavern, above the bar, you can see scores of foreign banknotes vividly illustrating the broad, international clientele who have drunk here over the years. True to its “old-fashioned feel”, the place keeps television to the minimal, so as to allow the patrons – up to 140 men at a time – to drink in peace. The hospitality of this kind makes the whole world of difference!

The Scotsman's Lounge on Cockburn Street is quite popular with locals and tourists alike who can appreciate good live music, particularly bagpipes, played here every evening. Also adding to the appeal is an impressive selection of drinks and food to choose from. Walls of the pub are adorned with an array of historical documents and pictures of pipers, largely contributing to the relaxed atmosphere that draws in a regular crowd of visitors.
Image Courtesy of Flickr and summonedbyfells.
3

Many a local resident know Whistle Binkies mainly for its diverse live music – ranging from indie to traditional styles – and incredibly atmospheric setting. A word around campfire, still, is that Whistle Binkies is also the most haunted pub in Edinburgh! Young as it may be, open since only the mid 1990s, the place beats its centuries-old counterparts hands down when it comes to some seriously creepy things going on here.

Perhaps this is due to the location – built into the converted chambers below the "haunted" South Bridge. Over the years, the place has been plagued by two ghosts, namely: The Imp and The Watcher. The latter is a 17th century gentleman with long hair, responsible for various weird and wonderful deeds – from chopping up fruit and changing clocks to locking up staff in the cellar, and more.

However, if ghost sightings are not a deterrent, you and your friends will surely enjoy this pub as a great place for a drink, chill-out and a bit of laugh, all to the eclectic tunes played here regularly.

The Royal Oak of Edinburgh is a 200-year old pub and folk music venue well known for its live music sessions. It counts various high-profile Scottish musicians, such as Kris Drever, Bobby Eaglesham, Danny Kyle and Karine Polwart, amongst its former resident performers.

During the 1960s, The Royal Oak was owned by the former Heart of Midlothian footballer Alan Anderson, though during his time, it was called “The Pivot”. The place gained a reputation as a folk music venue after Dorothy Taylor took over the pub in 1978, which she ran alongside her sister Sandra – a former star of The White Heather Club TV Show – until 2003, when the current licensee Heather Mckenzie stood at the helm.

In 2008, Magic Park Records recorded and released an album featuring musicians from the Royal Oak, entitled “The Royal Oak: Best of Folk”, and The Royal Oak's resident folk club (The Wee Folk Club) was awarded “Club of the Year” at the annual Scots Trad Music Awards.

The Royal Oak features in Ian Rankin's “Set in Darkness”, an Inspector Rebus novel. The scene is – according to Rankin – his favourite of all the pub scenes in the Rebus series.
Image Courtesy of Wikimedia and summonedbyfells.
Sight description based on Wikipedia.
5

Internationally renowned among musicians and lovers of real traditional music, Sandy Bell's is one of the top folk music venues in Edinburgh, absolutely reflecting the local culture. Regularly played by an extraordinary lot of influential musicians of numerous styles and backgrounds since 1942, it seems like this legend of an institution has been around forever with the gentlemen jamming folk music and sipping beer in the back.

A combination of lively and often improvised Scottish tunes, friendly staff and the rich choice of real ales and plentiful malts make the atmosphere of this small joint truly brilliant. Ideal for a night out on the town, it gets quite crowded on the weekends, but if you're in for a stylish drinking experience, this place won't disappoint!
Image Courtesy of Wikimedia and Richard Webb.
6

Thirsty lovers of dogs, while in Edinburgh, will surely have their hearts melt visiting this old establishment. It sits on the ground floor of a Georgian building adjoining Candlemakers Hall, established in 1722. The pub is named after Greyfriars Bobby, the Skye terrier, who after his owner passed away in 1858, kept watching over his grave at Greyfriars Kirkyard every day for the rest of his life. In the end, the loyal dog was buried alongside his master in 1872.

Today, a symbol of devotion, the Greyfriars Bobby statue stands proudly outside the bar, so that any of the visitors can raise a pint to him with one of their award winning ales. If you're not sure what to drink yourself, seek the advice of their own in-house expert cask master.
Image Courtesy of Flickr and travelmag.com.
7

At Number 74/78 Grassmarket there is a pub whose name – The Last Drop – makes one wonder as to the exact meaning of it. The answer is found on the signage board at the entrance featuring a gallows alongside the pub's name, as well as on one of the beams inside. Back in the day, this place was where the death row prisoners enjoyed their last drink, presumably to the last drop, before they were hanged.

The hangings happened “conveniently” close, in Grassmarket square, a small rectangular just a few steps from the pub, which saw a great many public executions in the olden times. Throughout 1661-1668, no less than a hundred Presbyterian opponents to the entry of the Anglican church into Scotland, plus rebels and thieves of various sorts met their end here. The Last Drop pub, in essence, commemorates the last hanging that took place in Grassmarket in 1864, and is the only building in the area to have conserved its bare style and the exterior from that period.

Venturing inside you will find a traditional pub of unique character, famed for its eclectic range of real ales, dully served with a generous measure of proper British hospitality.
Image Courtesy of Wikimedia and Nicholas Mutton.