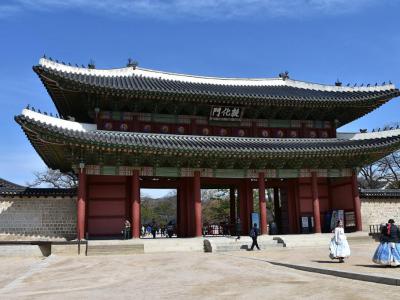 Changdeokgung Palace, also known as Prospering Virtue Palace, has a beautiful setting in one of Seoul's parks. The palace enjoys status as one of the Joseon Dynasty's Five Grand Palaces. One of the noteworthy things about this 15th-century palace is that it blends into the natural topography in a way not commonly seen in other buildings.

The Donhwamun Gate and Geumcheongyo Bridge are two of the oldest structures on the property built in the 15th century. Injeongjeon Hall served as an area for coronations, as well as the reception of envoys. Seonjeongjeon Hall was the location for daily meetings with the king and government ministers, while Juhamnu Pavilion was once the royal library.

Huijeongdang Hall, a residence for the king, and Daejojeon Hall, the queen's residence, are also noteworthy. Yeon-gyeongdang Residence is an 1827 audience hall. Huwon is a garden consisting of 78 acres in the back of the palace.

Why You Should Visit:
Although sometimes referred as a 'backup' palace to Gyeongbokgung, the interior is actually more complete. As such, you will be able to have a better understanding of how life in a palace is like. The "Secret Garden" is a must-see.

Tip:
Those wearing 'hanbok' can enter the palace free. You can also buy the Royal Palace Pass that gives you free entrance to 5 palaces (including the 'Secret Garden', which is a highlight of this palace visit).
Image by Richard Mortel on Wikimedia under Creative Commons License.