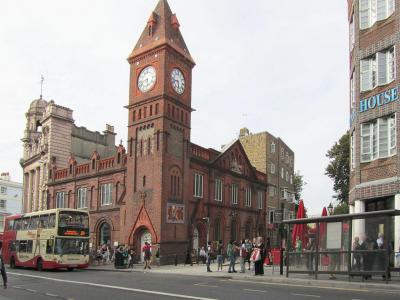 The original chapel was a stuccoed building in a broadly Classical style, with rounded sash windows and a pediment with the Prince's coat of arms. A row of Doric columns flanked the entrance. Inside there were galleries on each wall, supported by decorated columns. The gallery above the altar contained the organ, and there was a tall, highly decorated pulpit. The alterations of 1876–1877 removed the gallery above the altar and added a chancel, separated from the nave by an iron rood screen, new pulpit and lectern. The main weekly service at the Chapel Royal is held on Sundays at 11:00am. Other services are held on Saturdays, Tuesdays and Thursdays. There has been a long musical tradition at the chapel; concerts have been held right from the beginning, and continue to be a regular feature, usually on Tuesdays.
Image by The Voice of Hassocks on Wikimedia under Creative Commons License.
Sight description based on wikipedia