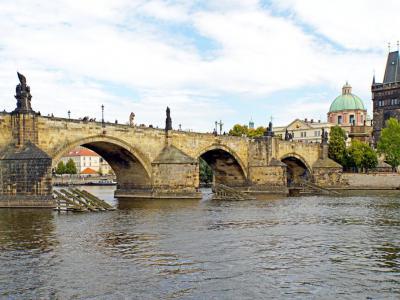 The Charles Bridge (Karlův most) is a famous historic bridge that crosses the Vltava (Moldau) river in Prague. Its construction started in 1357 under the auspices of King Charles IV, and was completed 45 years later in 1402. A legend has it that the construction began precisely at 5:31am on 9 July 1357 with the first stone being laid by Charles IV himself. This exact time was very important to the Holy Roman Emperor as he was a strong believer in numerology and felt that this specific time, which formed a palindrome (1357 9, 7 5:31), was a numerical bridge, and would imbue Charles Bridge with additional strength.

As the only means of crossing the Vltava, standing 516 meters long, nearly 10 meters wide, and resting on 16 arches shielded by ice guards, the Charles Bridge had been the most important connection between the Old Town, Prague Castle and the adjacent areas until 1841.

The bridge was originally called the Stone Bridge (Kamenný most) or the Prague Bridge (Pražský most) but has been known as "Charles Bridge" ever since 1870.

In the early 20th century, the bridge saw a steep rise in heavy traffic. On 15 May 1905, the horse line on the bridge was replaced with an electric tram and later, in 1908, with buses. All vehicular traffic has been excluded from the Charles Bridge since 1978, making it pedestrian-only.

The avenue of 30 mostly baroque statues and statuaries situated on the balustrade forms a unique connection of artistic styles with the underlying Gothic bridge. Most sculptures here, depicting various saints and patron saints venerated at the time, were erected between 1683 and 1714. As of 1965, all of the statues have been systematically replaced with replicas, while the originals have been exhibited in the Lapidarium of the National Museum.

Why You Should Visit:
For a picturesque panorama of the Prague riverside.
A chance to step back in time, into the 15th century.

Tips:
Come early in the morning or late in the evening if you need more space, as this place is usually packed with tourists!
If you decide to walk across the bridge, take the time to also visit the nearby John Lennon wall.
Image Courtesy of Flickr and Dennis Jarvis.
Sight description based on Wikipedia.