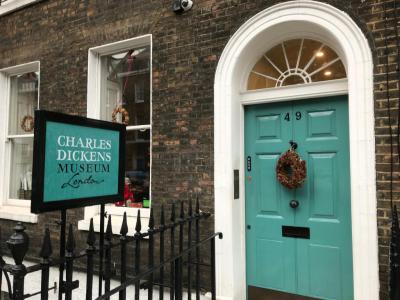 Spread over the four floors of a typical Georgian terraced house on a private street in an affluent part of London, this museum holds the world's grandest collection of letters, paintings, rare editions, manuscripts, original furniture and other items relating to the life and work of Charles Dickens. Being the last standing London residence of the Dickens family, the property escaped demolition courtesy of the Dickens Fellowship which renovated it and set up in its quarters a museum in 1925.

Dickens and his wife Catherine moved into this house in April 1837, just a year after their marriage, together with their baby son Charley. Over the next two years, the Dickenses had two daughters born here: Mary in March 1838 and Katey in October 1839. It was also here that in May 1837 the author's beloved sister-in-law, Mary Hogarth, passed away, following a brief illness, at the age of 17. The girl inspired many characters in Dickens's books, and her death was also fictionalized as the death of Little Nell in “The Old Curiosity Shop” novel.

Perhaps the best-known item on display in the museum is the portrait of Dickens, known as Dickens' Dream, created by R.W. Buss, an original illustrator of "The Pickwick Papers". This unfinished portrait shows Dickens in his study at Gads Hill Place surrounded by the many characters that he created. Another key exhibit is the desk Dickens used at public readings of his works. Several days a week, visitors are allowed to physically handle the displayed items.