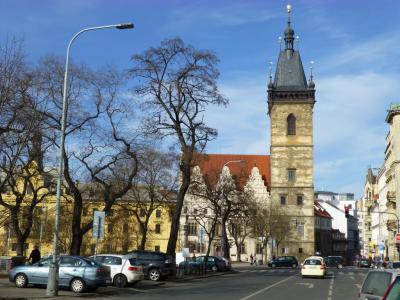 Charles Square is one of the largest (80,550 m²) squares in the world, and the largest town square in medieval Europe. Founded in 1348 by emperor Charles IV, it was meant to become the main square of the New Town; hence the New Town Hall built here.

In the late 14th century the Corpus Christi Chapel was put up in the middle of it. The chapel was closed in 1784 and demolished in 1791, prior to which it had displayed Crown Jewels every Easter. From the 15th century, the place had been known as Cattle Market, since drovers brought their herds here for sale; in 1848 it was finally renamed in honour of its founder.

In the 17th century, the Jesuits started to build their New Town residence in Charles Square. They also founded and built in 1655-1677 a new, early Baroque-style church dedicated to their patron saint and founder of the Jesuit Order, St. Ignatius of Loyola.

On the south side of the square there is a high Baroque style gate to the Church of St. John of Nepomuk "on the Rock" built in the 1730s. In the 1860s, the central portion of the square was turned into a park, adorned with a small ornamental pond and statues of various Czech writers and scholars. According to local legend, a marble stone used to stand in the park, marking the spot where secret executions once took place in the dead of night; true or not, but the stone is no longer there.

Why You Should Visit:
If tired of exploring Prague’s historical sites, Charles Square offers a nice, quiet respite with a chance to stretch out one's weary feet on the bench.
Image Courtesy of Wikimedia and giggel.
Sight description based on Wikipedia.