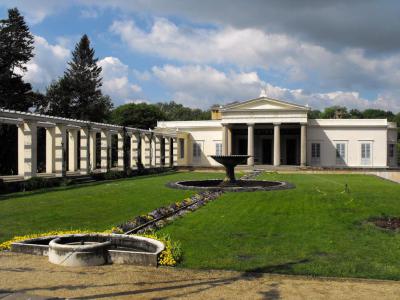 Cecilienhof Palace was the final palace built by the House of Hohenzollern, the rulers of Prussia. It was built in 1917 for the eldest son of Emperor Wilhelm II, Crown Prince Wilhelm, and his wife, Duchess Cecilie of Mecklenberg-Schwerin. The architect, Paul Schultze-Naumburg, designed Cecilienhof Palace in the English Tudor architectural style.

The building was planned to sit in the center of several courtyards that were part of the New Garden, which was laid out in 1787. This part of the park was redesigned as an English Landscape Garden in 1816, which made it the ideal location for the Tudor-style palace.

The palace had 176 rooms that were a mixture of public and private. The public rooms were on the ground floor, which included a great hall. The upper floors had private bedrooms, dressing rooms and restrooms. The palace featured 55 decorative chimney stacks, an oak stairway, a music salon, a smoking room, a writing room and a breakfast room that was designed to replicate a cabin on an ocean liner.

Cecilienhof Palace is known as the location of the Potsdam Conference of 1945. It was this conference in which the leaders of the United States, the United Kingdom and Soviet Union met to make decisions together regarding their role during World War II. The palace was named as a UNESCO World Heritage Site in 1990.

After the end of World War II, Cecilienhof Palace was used for state visits. Later, it was turned into a hotel. Today, a portion of the Cecilienhof Palace is a museum that offers both guided and unguided tours. Visitors can explore the palace Tuesday through Sunday from 10 AM to 4:30 PM during the winter season and 10 AM to 5:30 PM from April to October.
Image Courtesy of Wikimedia and Krückstock.