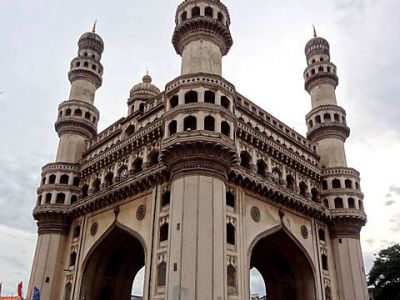 The Charminar, built in 1591 CE, is a monument and mosque located in Hyderabad. The landmark has become a global icon of Hyderabad, listed among the most recognized structures of India. The Charminar is on the east bank of Musi river. To the northeast lies the Laad Bazaar and in the west end lies the granite-made richly ornamented Makkah Masjid. The English name is a transliteration and combination of the Urdu words Chār and Minar, translating to "Four Towers"; the eponymous towers are ornate minarets attached and supported by four grand arches.

The Archaeological Survey of India (ASI), the current undertaker of the structure, mentions in its records that: "There are various theories regarding the purpose for which Charminar was constructed. However, it is widely accepted that Charminar was built at the center of the city, to commemorate the eradication of plague", as Muhammad Quli Qutb Shah had prayed for the end of a plague that was ravaging his city and vowed to build a Mosque at the very place where he prayed.

Mohammed Quli Qutb Shah laid the Charminar, the structure was intended to serve as a Mosque and Madraasa. Mir Momin Astarabadi, the prime minister of Qutb Shah played a leading role to prepare the layout plan for the Charminar along with the new capital city (Hyderabad), the additional eminent architects from Persia were also invited to develop the city plan. the structure is of Indo-Islamic architecture style, incorporating Persian architectural elements. The Charminar was constructed on the intersection of the historical trade route that connects the markets of the Golconda with the port city of Masulipatnam. The Hyderabad city was designed keeping Charminar as a center piece. The city was spread around the Charminar in four different quadrants and chambers, segregated according to the established settlements.
Image Courtesy of Wikimedia and Gopikrishna Narla.
Sight description based on Wikipedia.