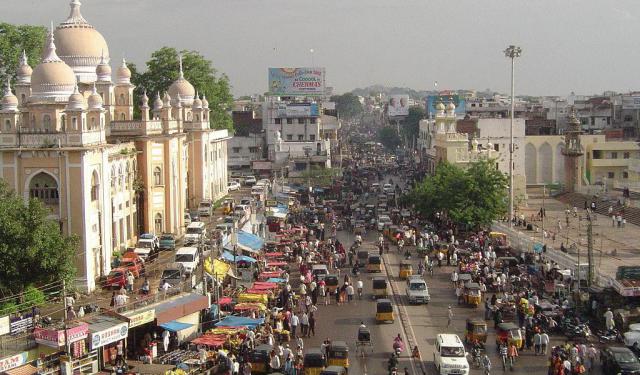 Hyderabad is the city of contrasts. There are many cultural sites and places of interest to explore here, including NTR Memorial, State Archeology Museum, Public Gardens and many religious sites, such as Birla Mandir (Hindu temple), St Joseph's (Roman Catholic) Cathedral and more.
Image Courtesy of Wikimedia and Ravikan Rao.
How it works: Download the app "GPSmyCity: Walks in 1K+ Cities" from iTunes App Store or Google Play to your mobile phone or tablet. The app turns your mobile device into a personal tour guide and its built-in GPS navigation functions guide you from one tour stop to next. The app works offline, so no data plan is needed when traveling abroad.

Besides a variety of plants, the gardens also house a souvenir complex, a visitors train, restaurants and a waterfall.

Image Courtesy of Flickr and Suman Kota.
Sight description based on Wikipedia.
2

Apart from the main shrine, the consorts of Lord Venkateswara, Padmavati and Andal are housed in separate shrines. The temple also has separate shrines for various Hindu gods and goddess including Shiva, Shakti, Ganesh, Hanuman, Brahma, Saraswati, Lakshmi and Saibaba. Selected teachings of holy men and Gurbani are engraved on temple walls. Birla temples are open to all, as identified by Mahatma Gandhi and other Hindu leaders.
Image Courtesy of Wikimedia and Nikhilb239.
Sight description based on Wikipedia.
3

The Dinosaurium is the newest addition to the planetarium and science center and opened in 2000. Its exhibits include a 160-million-year-old mounted Kotasaurus Yamanpalliensis, excavated at Adilabad district in Andhra Pradesh and presented to the Science Museum by the Geological Survey of India. The Dinosaurium also has a collection of smaller fossils of dinosaur eggs, marine shells and fossilised tree trunks.
Image Courtesy of Flickr and Andrew Rivlin.
Sight description based on Wikipedia.
4

This museum's main attraction is its Egyptian mummy, which was brought to Hyderabad by the son-in-law of VI Nizam Mahbub Ali Khan, and donated it to the last Nizam Mir Osman Ali Khan. He reportedly brought it for a paltry sum of 1000 pounds. There is a huge gallery on Buddha dating back to last century. The museum has wide variety of archaeological artifacts from the Nizam, Kakatiya dynasty.
Image Courtesy of Wikimedia and Randhirreddy.
Sight description based on Wikipedia.
5

Public Gardens also known as Bagh-e-Aam is a historic park located in the heart of the city of Hyderabad, India. It was built in 1846 by Osman Ali Khan, the 7th Nizam of Hyderabad and is the oldest park in Hyderabad In Urdu "Bagh" means Garden and Aam or Aam Jana means the public. Earlier during the Nizam regime, it was called as "Bagham". Later it called as Public Garden. Potti Sriramulu Telugu University, well known open air theater "Lalitha Kala Toranam", "Jawahar Bal Bhavan", the Andhra Pradesh Legislative Assembly and Legislative council buildings are located here. Even today people use this as a recreation park.

In December 2007, the cathedral was re-opened for the celebration of Holy Mass during the Christmas celebrations. Extensive construction on the grounds, including the grand entrance stairway from the street to the cathedral, and a large terrace with a multipurpose hall below, was begun in 2001 under the administration of then parish priest, Rev. Fr. T. Lourdu.
Image Courtesy of Wikimedia and Myrtleship.
Sight description based on Wikipedia.
7

St. George's Church is the oldest church in the city of Hyderabad. It was built in 1844. The church was originally an Anglican church but is now under the auspices of the Church of South India.

The power struggle in the Nizam's State involved both the British and the French and both sides continued to struggle until in 1758, the French forces were recalled to Pondicherry to take part in the attack on Madras. In 1779 a British Resident was installed at the court of the Nizam. Eleven years later under the terms of a fresh treaty, two battalions of Sepoys under British officers were supplied to the Nizam who was responsible for their salaries. A separate clause stipulated that these men were not to be used against the allies of the Company. So gradually the British became a force to be reckoned with not only in military terms but also financially.

Through this period numerous families made their mark in Hyderabad Civil and Military Service under the Nizam's Government and their influence not only helped shape the city but also the church, which in this case was firstly Christ Church and then St. George's. It is pertinent that some recognition is given to these families by briefly mentioning them and their achievements in Hyderabad. The increase of families settling and growing in Hyderabad necessitated the need for a Church. It was then through the good grace of Nizam that this was made possible.

About 1836 under a Firman-e-Mubarak the Community through the good offices of the Resident obtained a piece of land from the Nizam with permission to build a Church. Thus a small Church the present Boys' School, was erected in 1844 and built by the congregation. It was known as Christ Church. Rev Frank Penny in his book on the Churches that were constructed in South India says the Chaderghat folk are very proud of their Church.

The foundation stone was laid in February 1844 and the building complete and opened for Divine Service on 19 September 1844.
Image Courtesy of Wikimedia and Chango60.
Sight description based on Wikipedia.