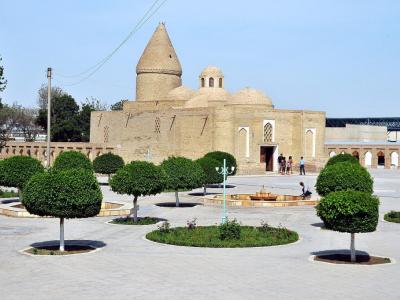 Chashma-Ayub Mausoleum is located near the Samani Mausoleum, in Bukhara, Uzbekistan. Its name means Job's well, due to the legend in which Job (Ayub) visited this place and made a well by striking the ground with his staff. The water of this well is still pure and is considered healing.

The current building was constructed during the reign of Timur and features a Khwarazm-style conical dome uncommon in Bukhara. Chashma-Ayub Mausoleum is in the middle of a small, ancient cemetery. The construction suffered some losses, but the preserved parts represent a combination of a harmonious entrance portal, and adjoining it are the remains of the western curtain wall. The construction layout of the portal is in a traditional pattern, made up in the form of two pylons, forming the niche overlapped by the semi vault. The northern part of the niche portal is a limited gable wall with a doorway. From the western end the portal is adjoined by a deep brick wall that measures 5.9 m, of which the western portion has been lost. The central room is overlapped by the tent-peaked dome. Except for the proportions of the construction, this monument has well-considered and perfectly executed decoration, the basic part of which is concentrated on the portal. The most effective place in the general composition of the decoration is ktoba, filled with Arabic inscriptions on a background of botanical ornamentation.
Image by Alaexis on Wikimedia under Creative Commons License.
Sight description based on wikipedia

Want to visit this sight? Check out these Self-Guided Walking Tours in Bukhara. Alternatively, you can download the mobile app "GPSmyCity: Walks in 1K+ Cities" from iTunes App Store or Google Play. The app turns your mobile device to a personal tour guide and it works offline, so no data plan is needed when traveling abroad.

Bukhara is a very important place for the Islam faith, having been at the center of the Muslim world during the golden age of the Samanids. Many mosques here date back centuries, with deep traditions and magnificent architecture. Thanks to its many mosques and madrasas, the historic center of Bukhara is a UNESCO World Heritage Site. Take our tour to see the most captivating mosques in the city.