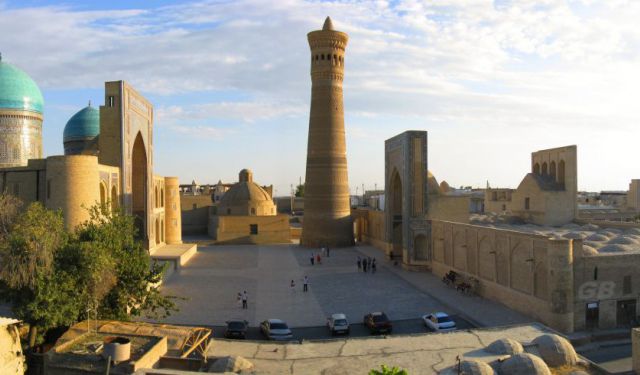 Bukhara is one of the cities of Uzbekistan and rightfully named a city-museum, with about 140 architectural monuments. Humans have inhabited the region around Bukhara for at least five millennia, and the city has existed for half that time. The mother tongue of the majority of people of Bukhara is Persian. Located on the Silk Road, the city has long served as a center of trade, scholarship, culture, and religion. UNESCO has listed the historic center of Bukhara (which contains numerous mosques and madrassas) as a World Heritage Site.
Image Courtesy of Wikimedia and Euyasik.
How it works: Download the app "GPSmyCity: Walks in 1K+ Cities" from iTunes App Store or Google Play to your mobile phone or tablet. The app turns your mobile device into a personal tour guide and its built-in GPS navigation functions guide you from one tour stop to next. The app works offline, so no data plan is needed when traveling abroad.

This museum is dedicated to the lives of two exceptional writers of Uzbek and Tajik literature – Sadriddin Ayni and Jalol Ikromi. Ayni lived and worked in the Kukeldash Madrasa at the 16th Century Labi-Haus complex, where the museum is now located.

Image Courtesy of Wikimedia and FrancisTyers.
2

The Nadir Divan-Beghi Madrasah was built in the 17th Century, and was originally intended to be a caravan saray. At the opening ceremony Imam Quli Khan surprisingly declared it as a madrasa, which involved adding a portal, towers and other features. The building is famous for its beauty, especially for magnificent images of birds nd animals on its portal.
Image Courtesy of Flickr and Geoffrey Krause.
3

The statue of Khodja Nasreddin is located in a small garden within Lyab-i Hauz. Nasreddin, a popular character from children’s fairy tales, is thought to have lived about 1,000 years ago. The statue depicts a smiling Nasreddin on a donkey.
Image Courtesy of Wikimedia and Dmitriy A. Pitirimov.
4

The Lab-i Hauz Ensemble (Persian: لب حوض, meaning by the pond) is a 16th – 17th Century pond complex that is one of only a few remaining sites of its kind in the city. Before the Soviet era there were many such ponds, which were the city's principal source of water. However, they were notorious for spreading disease and were mostly filled in during the 1920s and 1930s. This complex survived because it is the centerpiece of a magnificent architectural ensemble, which has not been significantly changed since its construction. Surrounding the pond on three sides are the Kukeldash Madrasa (1568–1569), the largest in the city, a khanaka (1620), or lodging-house for itinerant Sufis, and another madrasa (1622).
Image Courtesy of Wikimedia and F. Eveleens.
Sight description based on Wikipedia.
5

The Nadir Devan-Begi Khanaka is part of the Lyab-I Hauzx pond complex. Built in the early 17th Century by Nadir Devan-Begi, this large edifice was a center of cultural and religious life in Bukhara for centuries. It boasts numerous rooms and a square hall with good acoustics.
Image Courtesy of Flickr and Geoffrey Krause.
6

The Toki-Sarrafon is one of Bukhara’s four remained bazaars. This trading dome was used mostly for money exchange during the era of the Silk Road. Indian shop owners frequently exchanged money inside this bazaar. The site is no longer a money exchange center, but it now has lots of great shops where you can pick up interesting souvenirs.
Image Courtesy of Flickr and Geoffrey Krause.
7

The Tok-i-Telpak Furushon is another of the city’s four remaining bazaars. It is located on an important crossroads: five different roads lead here. This dome still sells traditional head wear such as fur hats and turbans for people of all ages and genders, as it has done for centuries. There is also a smithy at the entrance.
Image Courtesy of Flickr and Geoffrey Krause.
8

The Toki Zargaron, which also dates from the 1570s, is one of the largest trading centers in the city. If you are interested in buying some beautiful and unique jewelry to take home, you should take a trip here. This crossroads bazaar is also called the “Dome of Jewelers” because it houses 36 jewelers’ workshops.
Image Courtesy of Flickr and Geoffrey Krause.
9

The Ulugbek Madrasa was built in 1417 as a tribute to Ulugbek, a great astronomer and mathematician. This distinctive, well-proportioned edifice was designed by architect Ismail Isfagani. There are two elegant arches linked to the portal, while the façade is richly ornamented.
Image Courtesy of Wikimedia and Gilad Rom.
10

The Mir-i Arab Madrasa is believed to have been built by Sheikh Abdullah Yamani of Yemen in the 16th Century. Part of the massive Kalyan Complex, it is considered to be one of the most beautiful places in all of Bukhara. Still functioning as a madrasa today, it has more than 100 places for students behind its courtyard.
Image Courtesy of Wikimedia and Alaexis.
11

Image Courtesy of Wikimedia and Ipaat.
Sight description based on Wikipedia.
12

Kalyan Mosque (Maedjid-i kalyan), arguably completed in 1514, is equal with Bibi-Khanym Mosque in Samarkand in size. Although they are of the same type of building, they are absolutely different in terms of art of building. The roofing (of 288 domes) of the galleries encircling the courtyard of Kalyan Mosque rests on 208 pillars. The courtyard ends up with a portal to the main chamber with a cruciform hall, topped with a massive blue cupola on a mosaic drum.
Image Courtesy of Wikimedia and Piero d'Houin.
Sight description based on Wikipedia.
13

The Ark is a must-see highlight of your trip to Bukhara. This massive fortress was first built as long ago as the 400s. This defensive structure encompassed the royal courts that long held sway over Bukhara and the surrounding region. It continued to be used as a fortress until it fell to Russia in 1920. Today you can visit a number of museums inside the fortress that tell its unique story.

Image Courtesy of Wikimedia and Sergey Mikhaylovich Prokudin-Gorsky.
Sight description based on Wikipedia.
14

The Bolo-Khaouz Mosque is located opposite The Ark. It was erected in 1718 as a place of worship for emirs. Like many mosques in Bukhara, Bolo-Khaouz has a pool attached to it. The complex features a winter mosque, a summer mosque (built later, in 1917), a minaret and a pool. Look out for the beautiful ornamented ceiling and wooden columns of the summer mosque.
Image Courtesy of Flickr and upyernoz.
15

Chashma-Ayub Mausoleum is located near the Samani Mausoleum, in Bukhara, Uzbekistan. Its name means Job's well, due to the legend in which Job (Ayub) visited this place and made a well by striking the ground with his staff. The water of this well is still pure and is considered healing.

The current building was constructed during the reign of Timur and features a Khwarazm-style conical dome uncommon in Bukhara. Chashma-Ayub Mausoleum is in the middle of a small, ancient cemetery. The construction suffered some losses, but the preserved parts represent a combination of a harmonious entrance portal, and adjoining it are the remains of the western curtain wall. The construction layout of the portal is in a traditional pattern, made up in the form of two pylons, forming the niche overlapped by the semi vault. The northern part of the niche portal is a limited gable wall with a doorway. From the western end the portal is adjoined by a deep brick wall that measures 5.9 m, of which the western portion has been lost. The central room is overlapped by the tent-peaked dome. Except for the proportions of the construction, this monument has well-considered and perfectly executed decoration, the basic part of which is concentrated on the portal. The most effective place in the general composition of the decoration is ktoba, filled with Arabic inscriptions on a background of botanical ornamentation.
Image Courtesy of Wikimedia and Alaexis.
Sight description based on Wikipedia.
16

The Samanid mausoleum is located in the historical urban nucleus of the city of Bukhara, in a park laid out on the site of an ancient cemetery. This mausoleum, one of the most esteemed sights of Central Asian architecture, was built in the 9th (10th) century (between 892 and 943) as the resting-place of Ismail Samani - a powerful and influential amir of the Samanid dynasty, one of the Persian dynasty to rule in Central Asia, which held the city in the 9th and 10th centuries.

Although in the first instance the Samanids were Governors of Khorasan and Transoxiana under the suzerainty of the Abbasid Caliphate, the dynasty soon established virtual independence from Baghdad. For many years the lower part of the mausoleum remained under a two-meter high layer of sediment. Now the foundation has been cleared of these obstacles and the mausoleum, fully restored, is open for observation from all sides as was initially planned by the builders. The monument marks a new era in the development of Central Asian architecture, which was revived after the Arab conquest of the region. The architects continued to use an ancient tradition of baked brick construction, but to a much higher standard than had been seen before. The construction and artistic details of the brickwork, are still enormously impressive, and display traditional features dating back to pre-Islamic culture. The mausoleum of Pakistan's founding father, Muhammad Ali Jinnah--Mazar-e-Quaid is modeled after this structure.
Image Courtesy of Wikimedia and Atilin.
Sight description based on Wikipedia.