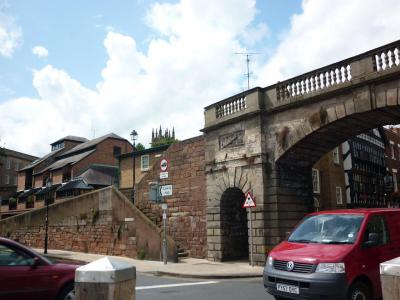 Chester city walls consist of a defensive structure built to protect the city of Chester. Their construction was started by the Romans when they established the fortress of Deva Victrix between 70 and 80 AD. It originated with a rampart of earth and turf surmounted by a wooden palisade. From about 100 AD they were reconstructed using sandstone, but were not completed until over 100 years later. The defences were improved, although the precise nature of the improvement is not known. After the Norman conquest, the walls were extended to the west and the south to form a complete circuit of the medieval city. The circuit was probably complete by the middle of the 12th century.

Maintenance of the structure of the walls was an ongoing concern. They were further fortified before the Civil War, and were damaged during the war. Following this they ceased to have a defensive purpose, and were developed for leisure and recreation. The walls are now a major tourist attraction, and form an almost complete circuit of the former medieval city, providing a walkway of about 2 miles (3.2 km).