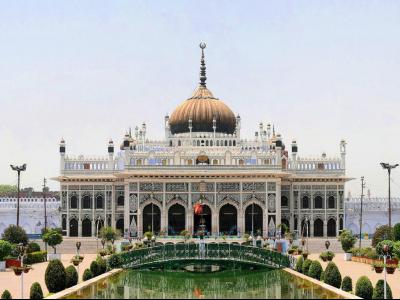 Muhammad Ali Shah, the ruler of Awadh, built the Chhota Imambara of Lucknow in 1838. He meant it to serve as a mausoleum for himself and his mother, as well as a congregation hall for Shia Muslims, the second largest branch of Islam after Sunni Islam. The monument is also known as Hussainabad Mubarak. The Imambara has five main doorways in honor of the "Holy Five" Saints of Islam.

There are two halls and a platform holding a replica of the protective grill over the grave of the saint Hossain of Iraq. The large green and white hall is called "The Palace of Lights" by westerners for its chandeliers and lamps. The walls are decorated with Quranic verses and Islamic calligraphy.

The Chhota Imambara has a gilded dome, turrets, spires, and minarets. Inside are the tombs of Muhammad Ali Shah, his daughter, and her husband. Their resting places are replicas of the famous mausoleum Taj Mahal.

Other buildings in the complex are the Treasury, a structure built for symmetrical balance; the Husainabad Mosque; and the Satkhanda or Watchtower, unfinished, built for lunar observation.
Image Courtesy of Wikimedia and Muhammad Mahdi Karim.