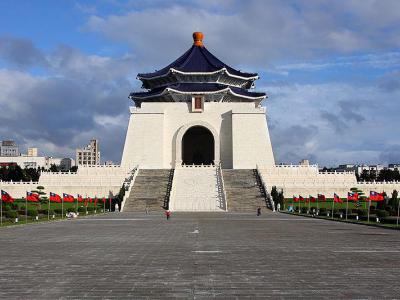 The Chiang Kai-shek Memorial Hall is a famous national monument, landmark and tourist attraction erected in memory of Generalissimo Chiang Kai-shek, former President of the Republic of China. Surrounded by a park, it stands at the east end of Taipei's Liberty Square and is flanked on the north and south by the National Theater and National Concert Hall.

The Memorial Hall is white with four sides. The roof is blue and octagonal, a shape that picks up the symbolism of the number eight, a number traditionally associated in Asia with abundance and good fortune. Two sets of white stairs, each with 89 steps to represent Chiang's age at the time of his death, lead to the main entrance. The ground level of the memorial houses a library and a museum documenting Chiang Kai-shek's life and career, with exhibits detailing Taiwan's history and development. The upper level contains the main hall, in which a large statue of Chiang Kai-shek is located, and where a guard mounting ceremony takes place at regular intervals.

Why You Should Visit:
The architecture is incredibly unique and views of the square are excellent from top of the Hall's stairs.
The Hall is also flanked by the National Theater & Concert Hall, which are good places to stop for lunch, tea, or gift shopping.

Tip:
The Military Honor Guard changes every hour, on the hour, from 9am to 5pm. Get there 10-15 mins early – it often draws a big crowd. Afterward, you may browse the garden downstairs or museum with its multiple exhibits.
Key tip for best viewing of the changing of the guard ceremony: If facing the statue, stand on the very right side closest to the elevator entrance. There you will see – and be able to take photos of – the new guards coming out, the entire ceremony unobstructed, and then the old guards exiting.