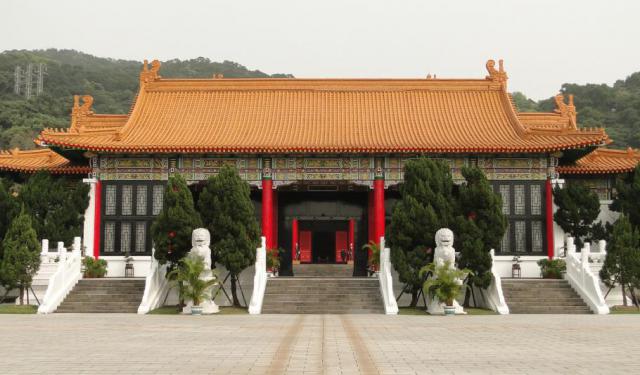 Covering a swathe of central Taipei, Zhongshan is the city's most fascinating district. It takes the name from Sun Yat-sen, aka Sun Zhongshan, who was a Chinese statesman and went down in history as the provisional first president of the Republic of China in 1912. Caught in the crosshatch of the area's main streets and secret alleyways is a wonderful mish-mash of attractions: museums and galleries, handsome brick buildings, quirky boutiques and corner temples, cool bistros and funky restaurants.

Zhongshan is generally renowned for its vast assortment of cheap street food that largely appeals to the young crowd. Distinctive in this respect is MAJI Square – an indoor market populated by vendors selling all sorts of fresh food, as well as live plants, gifts, and clothing. If you care for homemade stuff and things that are just plain fun and quirky, MAJI Square is your place!

On a more historical note, Zhongshan is a home to the landmark Grand Hotel that was once frequented by Chiang Kai-shek and many other political and military leaders. The tea rooms on the first floor are a good place to relax and absorb the grandeur of dynastic China.

The National Revolutionary Martyrs' Shrine located in the district is dedicated to those who sacrificed their lives for the Republic of China (ROC) during its tenure on mainland China and its later existence on Taiwan.

Another major local attraction is the Xingtian Temple. Built in 1967, it honors a famous ancient general who lived during the Three Kingdoms period (AD 162-219) and was deified for his Loyalty and Righteousness.

If you intend to venture on your own into Taipei’s hip and trendy Zhongshan district, whether to explore its colorful nightlife and to check out the favorite snacks of the locals, take this self-guided walking tour of Zhongshan and enjoy yourself to the fullest!
How it works: Download the app "GPSmyCity: Walks in 1K+ Cities" from iTunes App Store or Google Play to your mobile phone or tablet. The app turns your mobile device into a personal tour guide and its built-in GPS navigation functions guide you from one tour stop to next. The app works offline, so no data plan is needed when traveling abroad.

The Xingtian Temple is a new building dating back to 1967. This temple is dedicated to Guan Yu, who is considered a patron god of business people, and was a second-century general who was deified. Some of the most popular sights in and around the temple include figures of dragons.

This temple's design is simple yet has a dignified feel very fitting for its place in worship. The main hall has a censer with a unique dragon-centered design. Most of the worshipers at this temple gather in the courtyard to pray, either kneeling or bowing their heads.

There are free candles available for visitors to take if they wish. Although this temple is not as old as some in Taipei, it is an excellent place to gain an appreciation for the local religious life.


Image by ironypoisoning on Flickr under Creative Commons License.
2

Addiction Aquatic Development is a popular seafood market in Taipei that offers something for everyone. The seafood is offered by independent sellers, and you can find everything from fried or grilled fish to hot pot or sushi. In addition to having a wide variety of foods to buy, the interior is inviting, with exposed ceiling beams and wood paneling.

There is a snack bar where you can grab a quick bite featuring smaller portions of local favorites. Some of the foods you may find on the menu here include braised abalone, seafood congee, and swordfish rice noodle soup. You can even try a seafood plate that contains a sample of the day's catch.

You can also select live seafood to have cooked according to your preferences. Another option that you can take advantage of is having frozen crab legs, shrimp, and fish cooked for you. There are also condiments and other ingredients that you can select for your meal.
Image by the Archive Team on Wikimedia under Creative Commons License.
3

The Lin An Tai Ancestral House dates back to 1785 when it was constructed by a farming family. Today, it is one of Taipei's oldest existing homes and has been remarkably well-preserved. This house features two partitions and five annexes, with a southwest orientation designed according to the principles of Feng Shui.

One of the home's highlights is a traditional Chinese-style courtyard. The delicate carvings are among the house's most famous features. The carvings include a creative dragon on the front door, six dragon statues representing the family's six sons, and bats, which symbolize good luck, safety, and wealth.

Many of the bricks and tiles have been restored to help maintain as much of the building's original character as possible. The courtyard in front of the house is host to a pond in a unique crescent shape. You'll also enjoy seeing the pavilions and Jiangnan-style gardens present on this property.

Why You Should Visit:
Lovely spot to get away from the hustle and bustle, as the house lies in a charming ground with a pond and a number of annex buildings.
It is free to enter and they provide a beautifully done brochure for visitors with detailed info and maps.

Tip:
Make sure you cross the street and have coffee/tea in the Pavilion of Angel Life for an extra unique local experience.

MAJI Square is one of Taipei's most popular markets, offering a wealth of experiences for food, drinks, and entertainment. Restaurants that offer indoor and outdoor dining are very popular, representing cuisines such as English pub food, Latin American cuisine, steakhouse-style dining, and Mediterranean food. There is also a grocery store with a deli you may enjoy.

The Creative Market has a collection of housewares and local crafts to enjoy. You'll enjoy seeing a colorful merry-go-round nearby that is a favorite for visitors with kids. The Street Food Fair has vendors selling Taiwanese food, as well as Western food from locations as diverse as Chile and Mexico.

Be sure to stop by the craft beer taproom to try some craft brews that include local and imported selections. There are also some nightclubs at the market, some of which keep late night to early morning hours. Theme nights are very popular, featuring 80s and 90s hits.
Image by Wpcpey on Wikimedia under Creative Commons License.
5

The Grand Hotel is a landmark located in Zhongshan District. The hotel was established in May 1952 and the main building was completed on October 10, 1973. It is owned by the Duen-Mou Foundation of Taiwan, a non-profit organization, and has played host to many foreign dignitaries who have visited Taipei.

The main building of the hotel is one of the world's tallest Chinese classical buildings at 87 metres (285 ft) high. It was also the tallest building in Taiwan from 1973 to 1981.

After Chiang Kai-shek's retreat to Taiwan in 1949, Chiang felt it was difficult to accommodate foreign ambassadors due to the lack of five-star hotels in Taipei. He wanted to build an extravagant hotel that would cater to foreign guests. His wife Soong Mei-ling (Madame Chiang) suggested building it on the old Taiwan Hotel on Yuanshan Mountain, the site of the ruins of the Taiwan Grand Shrine, a Shinto shrine during the Japanese rule. Chiang decided on a Chinese palace-style architecture to promote Chinese culture to the West through its extravagance. Taipei-based architect Yang Cho-Cheng was responsible for the design of the new hotel.

With its vermilion columns, the roof makes the hotel a visible showcase of Chinese architecture and culture. The hotel itself contains numerous objets d'art, wall panels, paintings, carvings, and significant restaurants. Dragon motifs are frequently intertwined throughout the various structures that make up the hotel, earning the hotel the name "The Dragon Palace". Besides dragons, lion and plum flower motifs also make a significant presence in the hotel. Each of the eight guest levels represents a different Chinese dynasty, as reflected through the murals and general decor.
Image by Bdavis545 on Wikimedia under Creative Commons License.
Sight description based on wikipedia
6

The National Revolutionary Martyrs' Shrine is dedicated to the war dead of the Republic of China. Built on Chingshan Mountain and overseeing the Keelung River in Taipei's Zhongshan District in 1969, the Martyrs' Shrine recalls the architecture of the Hall of Supreme Harmony in Beijing's Forbidden City.

The structure houses the spirit tablets of about 390,000 persons killed, among other engagements, during the Xinhai Revolution, Northern Expedition, Second Sino-Japanese War, Chinese Civil War, and the First and Second Taiwan Strait Crises. A changing of the honor guard from the various branches of the Republic of China Military, similar to the rituals at the Sun Yat-sen Memorial Hall and Chiang Kai-shek Memorial Hall, take place at the shrine.

Tip:
Be sure to check out the main hall and stick around for the changing of the guard ceremony which occurs on the hour between 9am-4pm. If you go on your own, you should wait until you can have the guards for your own, and then you can snap a picture with them.

The newest area of urban Taipei, the Xinyi district has technically existed only since 1990. Young as it is though, the neighborhood has earned a reputation of being one of the city's premier travel destinations.

Indeed, in Xinyi you’re never too far from experiencing something truly cool or iconic, be it the impressive Taipei 101 with its landmark observation deck or the breathtaking...  view more

Taipei is the political, economic, educational and cultural center of Taiwan, with a population of 2.5 million. The region of Taipei had been mainly inhabited by the Ketagalan tribe prior to the large influx of mainland Chinese immigrants in the 17th century.

Under the Qing Dynasty of China, Taipei was made the capital of Taiwan in 1887 when the island was incorporated into a Chinese province....  view more

Among the many things Taipei is famous for, shopping is undoubtedly one of the main. The fashion-conscious and business-oriented Taiwanese capital is rightfully regarded to be a shopper’s paradise in East Asia, comparable to the likes of Hong Kong, Seoul, Tokyo, Singapore or Kuala Lumpur. The variety of markets, boutique stores, shopping districts and, of course, first-class malls here is truly...  view more