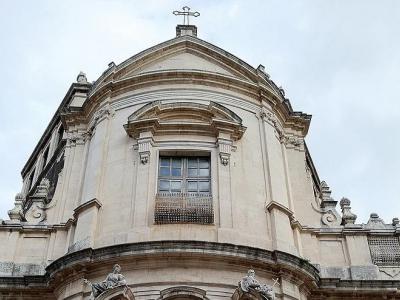 The Church of San Giuliano is a must-see in Catania – considered one of the city’s most beautiful places of worship. It stands on the site of an older church that had been razed by a 1693 earthquake.

The present late-Baroque building was constructed between 1739 and 1751 using the designs by Giuseppe Palazzotto and Vincenzo Caffarelli, and is dedicated St Julian the Hospitaller. The temple has an elaborate convex façade, with the upper story windows shielded by a dense iron grate, once used by the Benedictine nuns of the adjacent convent to observe the colorful procession on the day of Sant'Agata. The façade pediment holds a reclining maiden, sculpted by Gaspare Ciriaci. The entrance door carries a cross of the Order of the Holy Sepulchre, who restored the church after 1939.

The interior nave is an elongated asymmetric octagon with a main altar and four shallow circumferential minor altars. The main altar in polychrome was designed by Giovanni Battista Vaccarini, and sculpted by Giovanni Battista Marino. The statuettes, flanking the throne and painted cross, depict allegories of Faith and Charity. The minor altarpieces depict: Madonna of the Graces with St Joseph and St Benedict; St Anthony Abbot in Ecstasy; Scenes of the Life of St Julian and his Martyrdom; Crucifixion scene with Mary of the Sorrows, Mary Magdalen, and St John the Evangelist.

The cupola fresco, depicting God the Father and St Peter, was painted by Giuseppe Rapisardi in 1842.
Image Courtesy of Wikimedia and Effems.
Sight description based on Wikipedia.