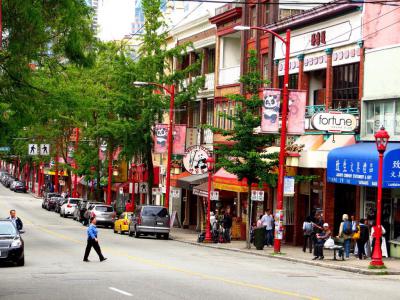 Vancouver's Chinatown is Canada's largest. Centered on Pender Street, it is surrounded by Gastown and the Downtown Financial and Central Business Districts to the west, the Downtown Eastside to the north, the remnant of old Japantown to the northeast, and the residential neighborhood of Strathcona to the east. It attracts many tourists with its expressive culture, food, and traditional architecture. Chinatown is lined with numerous shops that sell herbs, sweets, clothing, and other items. Due to the large ethnic Chinese presence in Vancouver – especially represented by multi-generation Chinese Canadians and first-generation immigrants from Hong Kong – the city has been referred to as "Hongcouver" (a term considered derogatory by some Chinese).

Tip:
Don't go after 6pm because most of the shops will be closed.
You will be approached by panhandlers at any time of day, but if you just say "no" firmly then they will not trouble you further.
Image by Xicotencatl on Wikimedia under Creative Commons License.
Sight description based on wikipedia