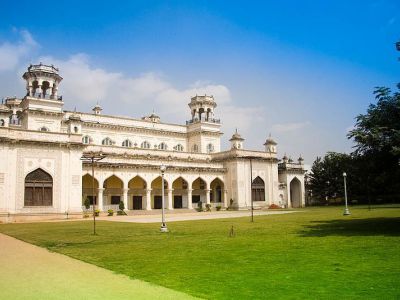 In Persian, Chahar means four and in Arabic Mahalat (plural of Mahal) means palaces, hence the name Chowmahallat means four palaces. All ceremonial functions including the accession of the Nizams and receptions for the Governor-General were held at this palace. The prestigious UNESCO Asia Pacific Merit award for cultural heritage conservation was presented to Chowmahalla Palace on March 15, 2010. UNESCO representative Takahiko Makino formally handed over the plaque and certificate to Princess Esra, former wife and GPA holder of Prince Mukarram Jah Bahadur.

While Salabat Jung initiated its construction in 1750, it was completed by the period of Afzal ad-Dawlah, Asaf Jah V, the V Nizam ensured its completion between 1857 and 1869. The palace is unique for its style and elegance. Building of the palace began in the late 18th century and over the decades a synthesis of many architectural styles and influences emerged. This palace consists of two courtyards, southern courtyard and northern courtyard. They have elegant palaces, the grand Khilwat (the Dharbar Hall), fountains and gardens. The palace originally covered 45 acres (180,000 square meters), but only 14 acres (57,000 square meters) remain today.

Khilwat Mubarak is the heart of Chowmahalla Palace. It is held in high esteem by the people of Hyderabad, as it was the seat of the Asaf Jahi dynasty. The grand pillared Durbar Hall has a pure marble platform on which the Takht-e-Nishan or the royal seat was laid. Here the Nizams held their durbar and other religious and symbolic ceremonies. The 19 spectacular Chandeliers of Belgian crystal recently reinstalled to recreate the lost splendor of this regal hall.

The clock above the main gate to Chowmahalla Palace is affectionately called as Khilwat Clock. It has been ticking away for around 250 years. An expert family of clock repairers winds the mechanical clock every week. Council Hall housed a rare collection of manuscripts and priceless books.The Nizam often met important officials and dignitaries here.Today it is venue for temporary exhibitions from the treasures of the Chowmahalla Palace Collection that of a bygone era.
Image Courtesy of Wikimedia and Srinayan Puppala.
Sight description based on Wikipedia.