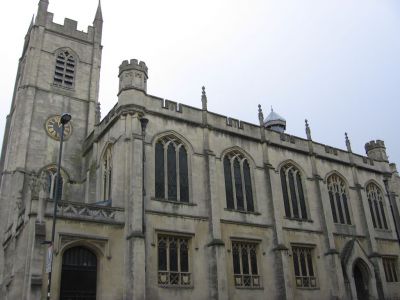 Christ Church is a proprietary chapel on Julian Road. The building was designed by John Palmer, one of the principal architects working in Georgian Bath, and was built in 1798. It has a neo-Gothic style, but classically proportioned, with north and south aisles and a gallery on three sides. Stained glass on the south side of the gallery is by A. O. Hemming and depicts Jesus, as the Good Shepherd, and the Parable of the Good Samaritan. The two windows to the west end are by James Powell and Sons and show Christ in Majesty and the raising of the daughter of Jairus. There are nine lancet windows in the apse, and the windows in the main body of the church feature individual saints, angels and biblical characters, themed around the Te Deum Laudamus. Among other notable parts of the interior is an unusual wooden altarpiece. The apse was added in 1865-6 by John Elkington Gill. The church tower contains a peal of bells, although these are not regularly rung.
Image by Vhk10 on Wikimedia under Creative Commons License.
Sight description based on wikipedia